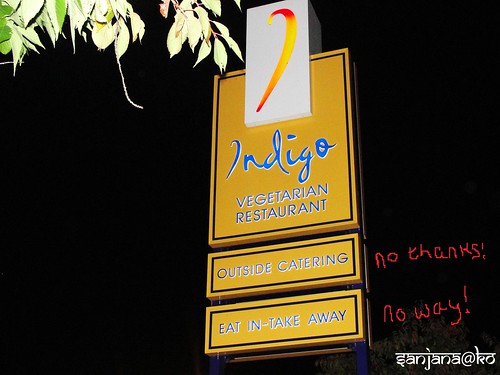 Where: Indigo pure vegetarian restaurant in Leicester (that’s lacto-vegetarian, although they also serve vegan and no onions/no garlic dishes)

With Who: Two fabulous friends

I went to Indigo Vegetarian Restaurant on Melton Road in Leicester at the beginning of this week and was expecting some really great things. Sadly I was really disappointed. We were greeted immediately and shown to our table in the far corner of the restaurant. We ordered our drinks (a jug of tap water… Ha. And a Pepsi) and read through the large menu. The menu at Indigo is filled with snacky ‘fast foods’ like dosa’s, pau bhaji, bhel, chaat, samosa, pizzas and noodles. One friend decided on ‘chutney powder dosa’ which comes with a sambhar (it resembled THICK Gujarati daal and definitely not sambhar). Another decided on a spicy ‘paneer pizza’ and I opted for ‘Indigo special noodles’ (hakka noodles with mushrooms and spinach). We also shared a large ‘chilli mogo’ (cassava stir fried with green peppers, green chillies and spring onions).

The waiter took our order and asked us if we would like him to turn the fireplace on, and although we declined it was a hospitable gesture. Our drinks arrived promptly as did our SMALL chilli mogo. We ordered a large. The waiter apologised and returned within five minutes with our large dish of chilli mogo. 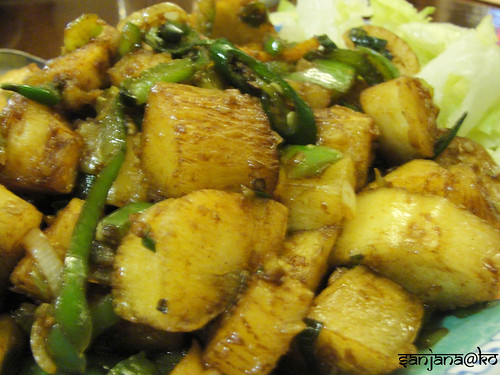 The highlight of the ‘meal’

Next came my Indigo special noodles which didn’t look that special at all. 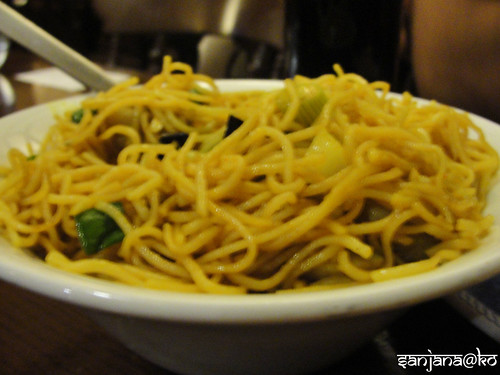 There were only 2 mushrooms in this and the spinach had done a disappearing act! 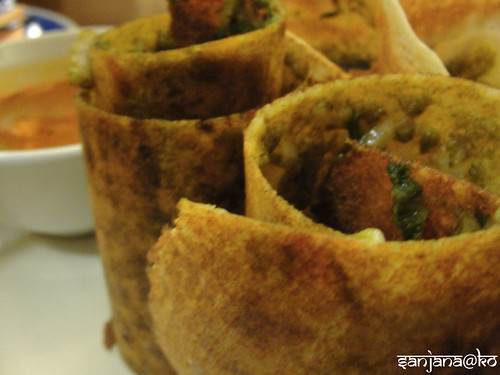 Then the chutney powder dosa arrived. My friend looked at me in disappointment. As she began to eat I asked her if she was enjoying her meal, to which she didn’t respond. Poor lil lamb! She was expecting something better than dosa spread with a brown looking coconut chutney which was meant to be green! And a phoney sambhar which looked like it had been replaced with leftover gloopy daal. She left half of it and I don’t blame her for doing so.

It seemed as if my friend’s pizza was being prepared in New Delhi and flying out to Leicester within the week. It really did take that long to come! So meanwhile, as we all munched on noodles and mogo a particularly noisy family arrived complaining that they would like someone to WATCH their car while they ate. No joke. That’s what they asked. I’m not sure whether they asked because they wanted all the diners to look out of the window at their expensive ride, or because they SERIOUSLY thought that a small-town restaurant offered that kind of service. Anyway, the manager informed them that it would not be possible and that their car park was safe and secure (it is). Bah! Enough of my restaurant rants. 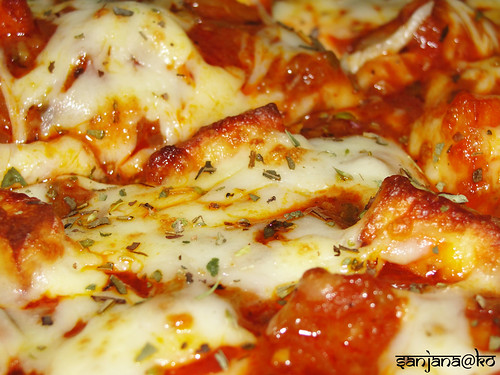 The pizza arrived. It looked pretty good, in fact I was so lured by the smell of it that I decided to be a massive fatty and have a piece too (for the purpose of giving my verdict in this review. Yes, that’s my excuse). All was well until I got halfway through and realised that the ‘soft texture of the cheese’ was indeed uncooked pizza dough! 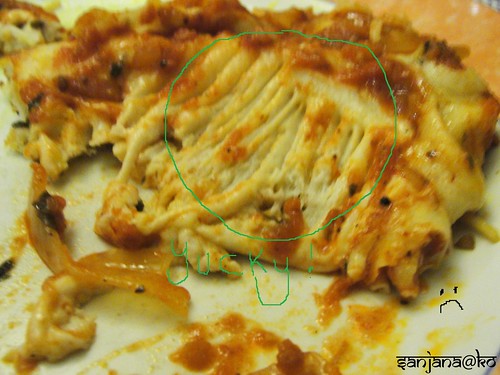 BEHOLD! The worst offender of them all!

My friend decided to go and tell a waitress about the pizza horror as there were no waiters coming to check if everything was okay at our table. She seemed not to believe my friend at first and told him she would show it to the chef. When she came to pick it up from our table I was dissecting the corner of it with my knife just to see if the other slices were the same (I was curious and paying!) She told me to ‘LEAVE IT ALONE’ (as she would take it back to the kitchen). I was super annoyed! How dare she speak to a customer in such a manner when they were at fault?! Needless to say I didn’t see her for the rest of the night, and good job too! The waiter came back to ask us if we would like another pizza but we decided that one uncooked pizza was enough for the night. We got up and paid the bill at the front desk which came to around £24 even though they knocked off the price of the pizza. Not great value for money considering that the food and service were definitely not up to standard. Will I be going back? Not on your nelly.

Oh and we didn’t get to see which car ‘loud’ family came in. Although I’m sure that it didn’t get robbed. We would have heard them complaining if that was the case…