I like my pancakes fluffy, stacked high and drenched in syrup. If they just so happen to come with a side of spiced pears, I wouldn’t turn my nose up.

Aquafaba, or chickpea brine is the magical egg white alternative rocking the vegan food world. From Vegan Macarons, to Pavlova, Meringue Nests, Meringue Kisses and even vegan cheese, the discovery of aquafaba by Goose Wohlt opens up a whole lot of possibilities for eating the foods you love and sticking to a vegan diet.

As many of you already know, I love playing around with this ingredient, conjuring up my own takes on dishes I adore, and all the while veganizing them for my family, friends and you fantastic people. 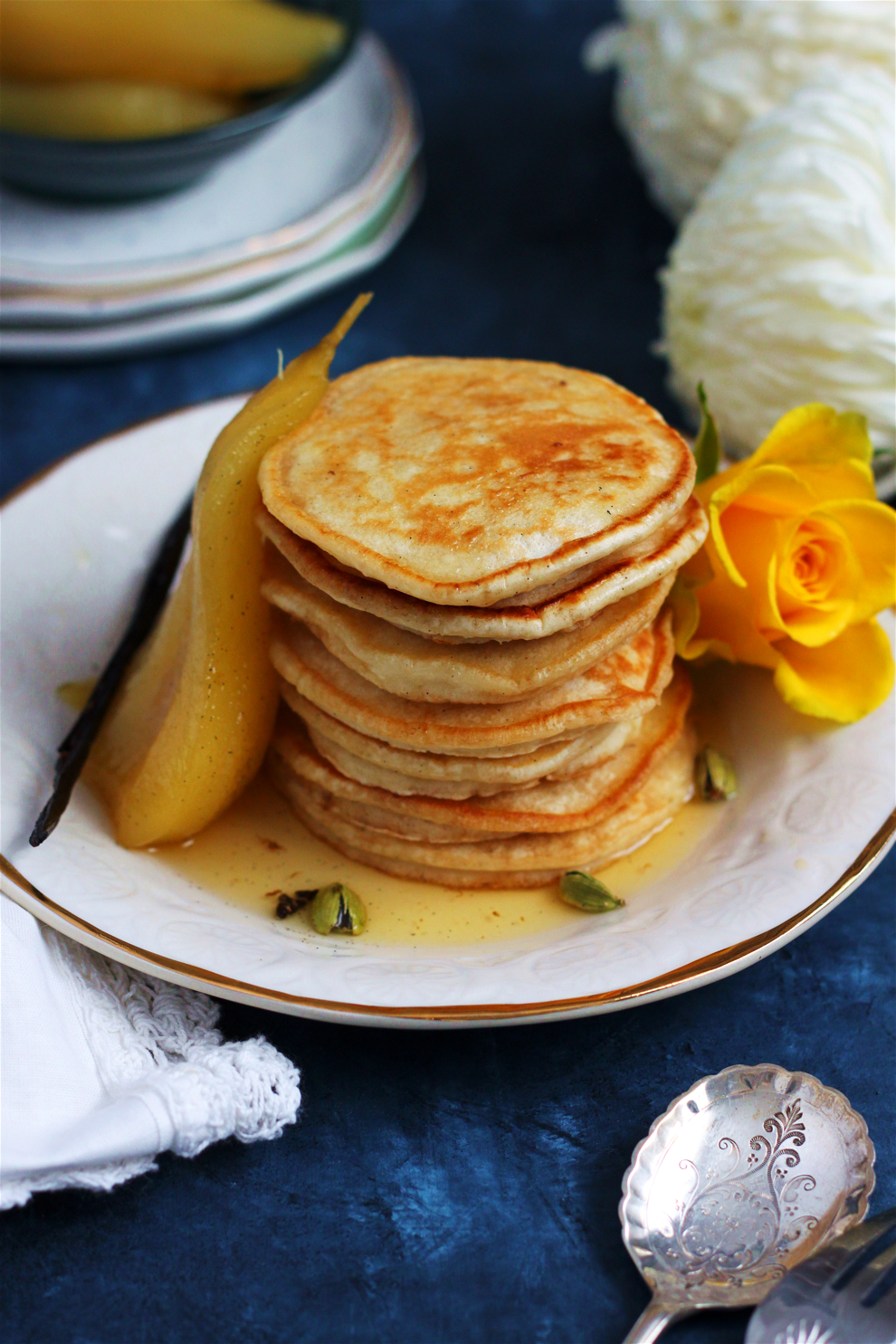 My favourite Sunday morning ritual when I have friends or family over is to start on a big batch of pancakes while everyone’s still asleep. Not only does it make the entire house smell like the inside of a bakery that just had a massive vanilla cake eruption, it also ensures I get a huge smile and hug from everyone when they come downstairs. And I love a good cuddle, me.

With the pears, these pancakes become extra special. The light, fluffy, crispy pancakes soak up all that vanilla and cardamom-spiced syrup like little sponge frisbees you’ll want to play with all day long. The pears offer a very welcome fresh, tender, and juicy texture that’s perfect for balancing out the fluffy richness of the pancakes.

This is my basic vegan aquafaba pancake recipe for sweet pancakes. If poached pears aren’t your thing, you could add blueberries, raspberries or chocolate chips (pop them on top of each scoop of pancake batter before the pancake has a chance to cook through on the pan).

I’ve even adapted this recipe (skipped the sugar and vanilla) to make savoury pancakes with chillies, vegan cheese and corn. Weirdly, I like to top those with a drizzle of golden syrup, too. If you have a soft spot for sweet and salty combinations, I recommend it!

1. To make the poached pears: Place the sugar, golden syrup and water in a deep saucepan. Bring to the boil and add the cardamom pods and vanilla bean paste.

2. Peel the pears, keeping the stalk attached and slice them down the middle. Remove the pear cores.

3. Place the pears in the saucepan and ensure they’re completely submerged. Bring to the boil and simmer for 15 minutes. Remove from the heat and allow the pears to cool completely in the syrup.

4. Once the pears have had a chance to cool completely, remove them from the syrup and bring the syrup back to the boil. Allow to simmer until it has reduced by half and is sticky and syrupy.

5. To make the vegan aquafaba pancakes: Combine the flour, baking powder, baking soda and salt in a bowl.

6. Mix together the almond milk, apple cider vinegar, sugar, vanilla, and groundnut oil. Allow the mixture to sit for 10 minutes and then whisk briefly.

7. In a large, clean bowl of a stand mixer, whip the chickpea liquid until stiff peaks form. You could also use an electric beater.

8. Add the wet almond milk mixture to the flour mixture and whisk until just combined. It’s important not to over mix this.

9. Use a rubber spatula to gently fold the whipped chickpea meringue into the batter until you have a light, foamy batter. Try your best not to deflate the mixture by mixing too much.

10. Heat up a large non-stick pan greased with groundnut oil. You want a low-medium heat. Not too high or the pancakes will burn before they get a chance to cook through.

11. Use an ice cream scoop to dollop the pancake batter on to the pan so that you get even-sized pancakes. Ensure you leave some space around each pancake as the mixture will spread slightly.

12. Allow to cook until small bubbles appear on the surface of the pancake and the edges lose their raw shine, about 40 seconds.

13. Flip and cook briefly on the other side. Remove from the heat. Repeat to make the rest of the pancakes.

Serve with the poached pears and pour the extra syrup into a jug for drizzling over the pancakes like glorious waterfall. Dive in quickly and with purpose. 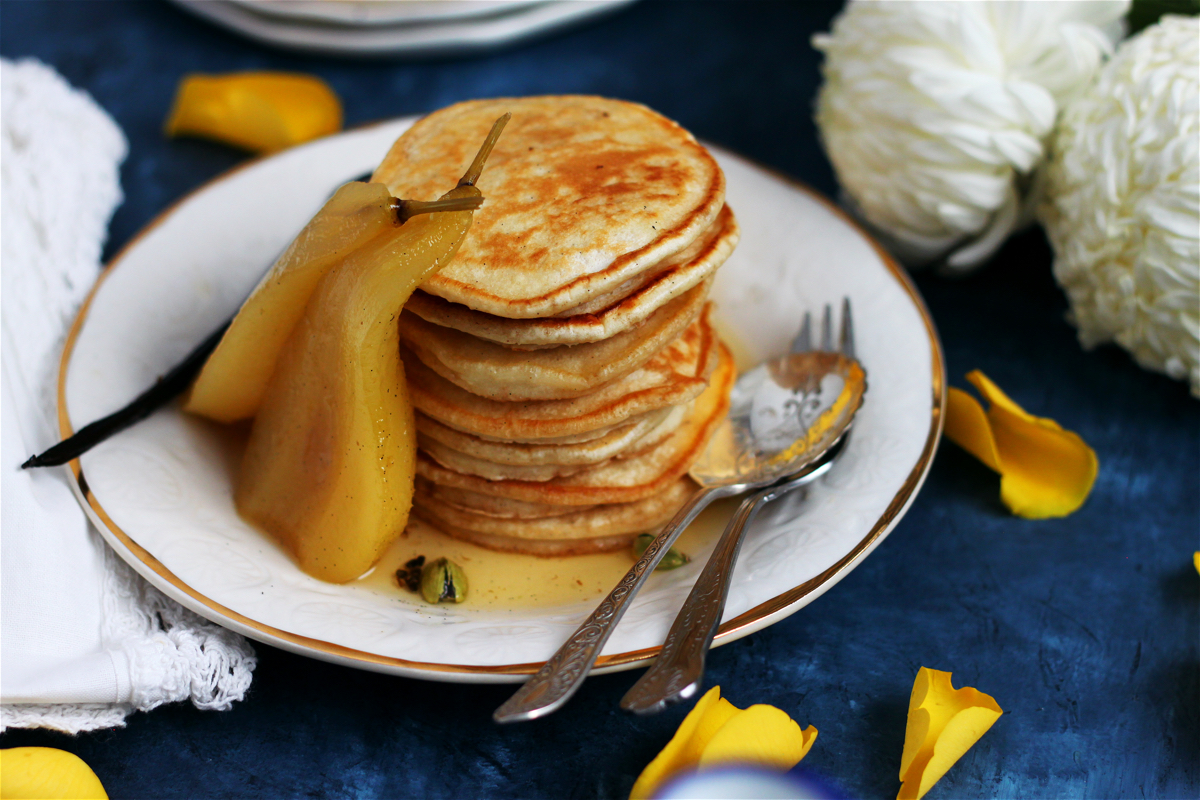 What are your favourite pancake add-ins and toppings? Let me know in the comments below and let’s see if we can re-create some of them here.

Brilliant - delicious - who'd have thought, no eggs.thank you