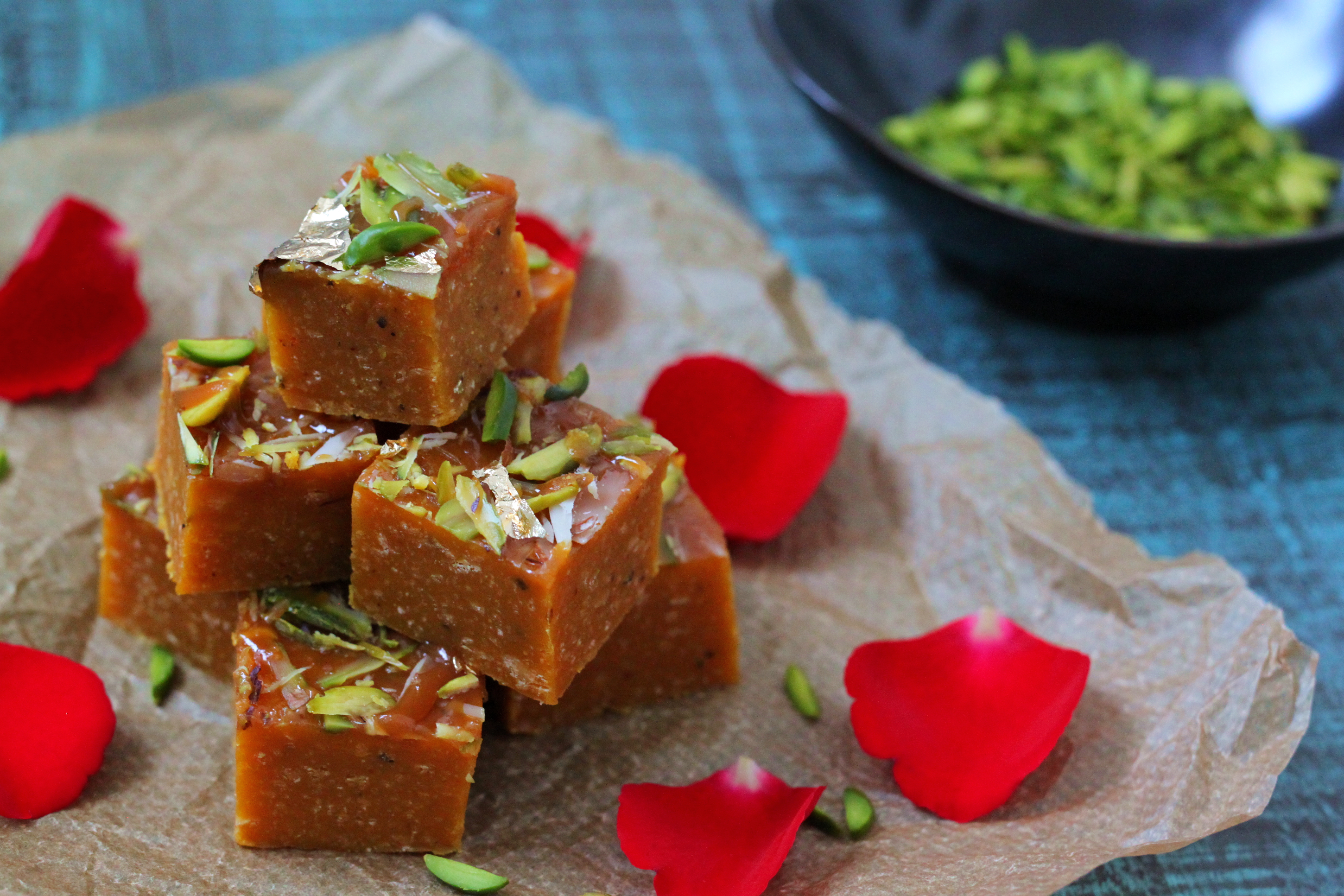 My grandfather was a sweet maker. He had big, thick-skinned hands that were made for harvesting sugar canes using a machete and stirring giant pots of bubbling syrup. He never used a sugar thermometer. He could tell it was done just by looking at the consistency of the syrup, perhaps testing it using a little cold water to see if it had a “one-string consistency ” or what a western pastry chef might call the “soft ball stage”. Indian sweet making isn’t for the feint hearted, you see. It’s painstakingly long, laborious, hot and intense work. Stirring, stirring, all the time you’re stirring. No, don’t stop because it will catch on the bottom and your whole mixture will taste scorched. Some of the most revered and expensive ingredients in Indian culture: sugar, milk, ghee and saffron, all wasted. If it was your full-time job and you had a knack for getting distracted, you’d be out of the door faster than you can say, “Oh fudge!”. 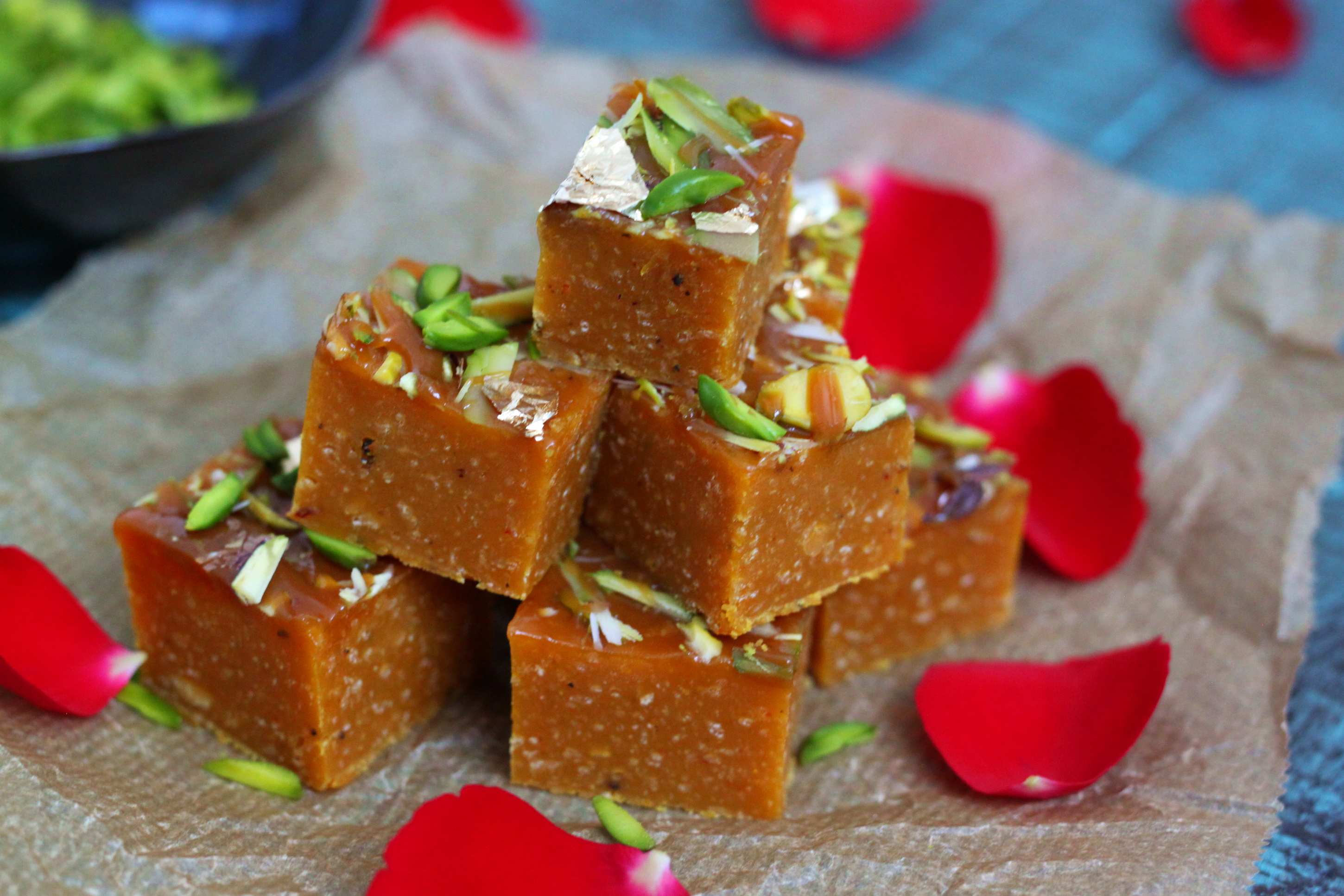 If you’ve ever stepped inside an Indian sweet shop you’ll be able to appreciate how much thought, heart and family history goes in to the spectacular arrangements of sweet stuff on display. Clue: the good ones almost always have the most tattered sign outside, as well as the longest queue to get in. Squares of milk fudge, diamond-shaped halwas and nut-studded pastry rolls adorned with warq (silver leaf) are majestic enough to transport you to the palaces of ancient India.

One of my favourite Indian sweets has to be Mohanthal – a rich, crunchy milk fudge made with chickpea flour, also known as besan. It’s traditonally spiced with cardamom, mace and saffron but here I’ve added a salted caramel twist because let’s be frank, who doesn’t love salted caramel?

Side note: there are plenty of varieties of vegetarian gold and silver leaf available now. I say this because there have been a tonne of internet rumours floating around claiming that all silver and gold leaf is made using non-veggie processes (I’ll spare you the details) but you don’t need me to tell you not to believe everything you read online, eh? If you’re not sure just ask in the shop. The good ones will show you the packaging from the one they use. 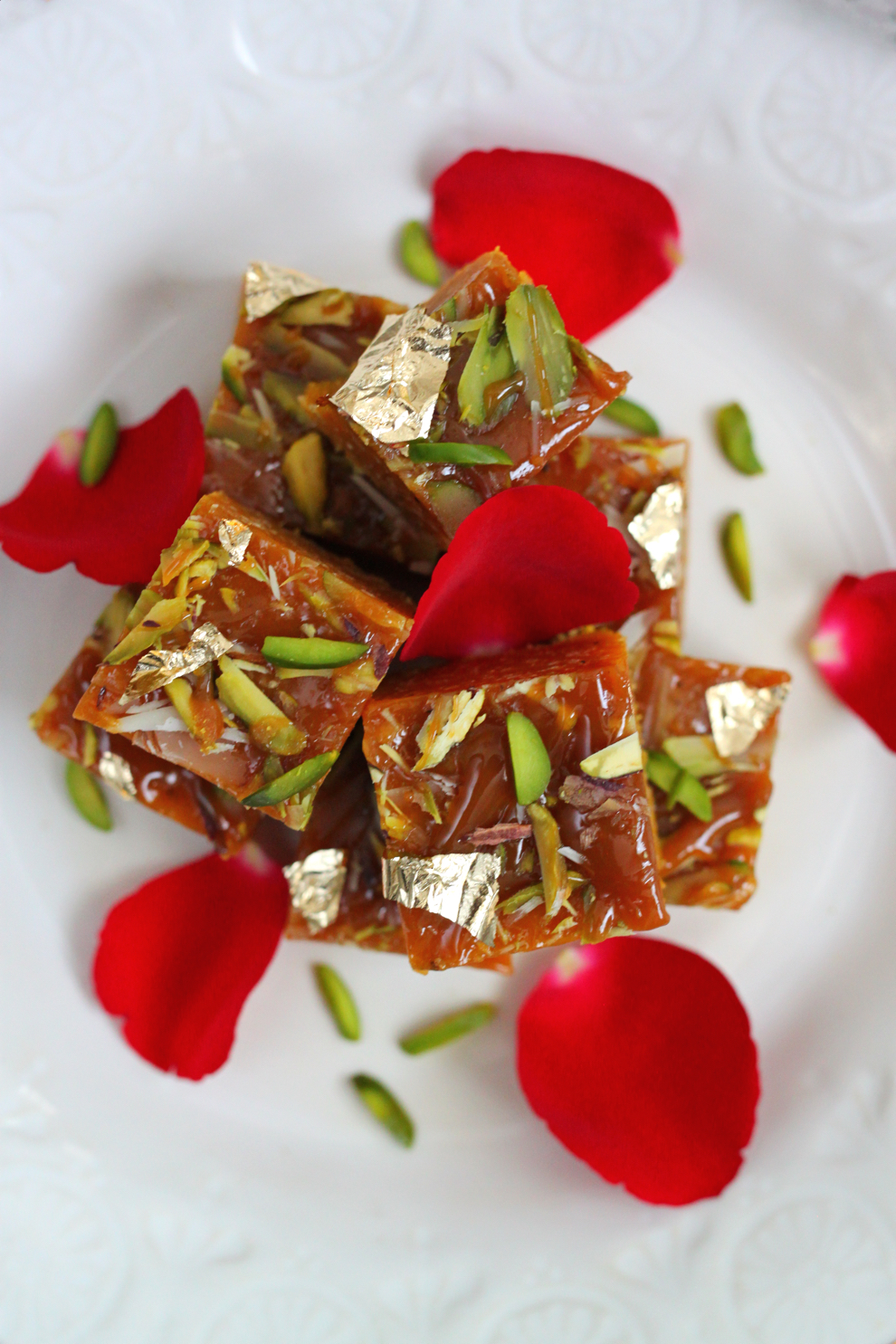 Mohanthal can be served in two ways: In pieces like the kind here, or loose as a lava-like liquid gold you scoop up with a spoon and nothing more. The liquid kind is is fondly known as Disco Mohanthal (which sounds just as fun as it is delicious). There’s a time and a place for both. I’ve set this Salted Caramel Mohanthal into crunchy fudge pieces but the addition of sweet caramel also means it is ridiculously good as bubbling Disco Mohanthal.

This is a pretty special recipe, guys. It’s a labour of love and is a very traditional way of making Mohanthal (no shortcuts with gum Arabic or goondh), the way a true Indian confectioner would make it – my only tweak is the addition of salted caramel. Don’t shy away because of the different steps. Indian sweet making is a beautiful, highly-specialised process which takes time and patience to master. Perseverance is key and once you’ve had a go and tasted your first batch, you’ll be hooked. 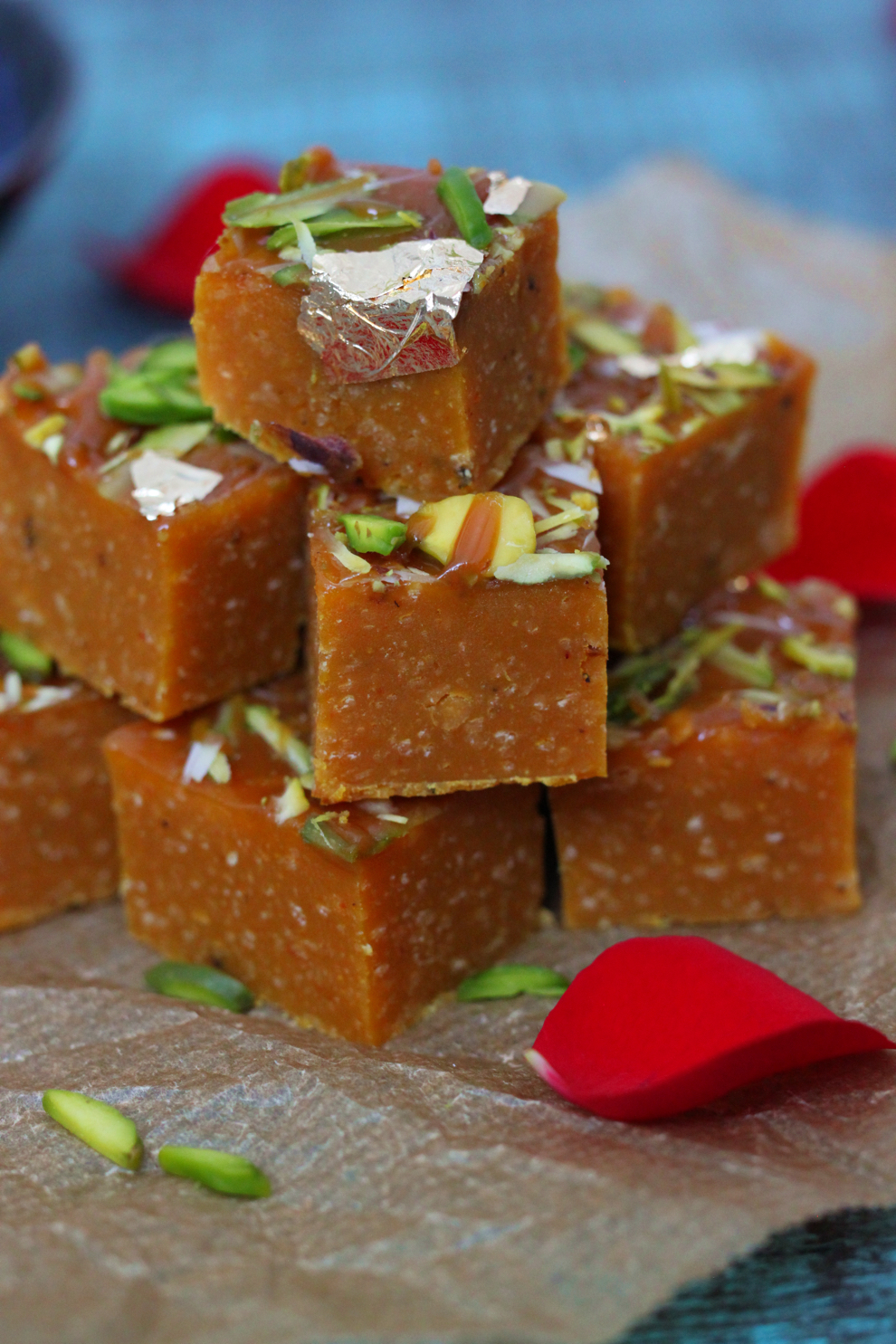 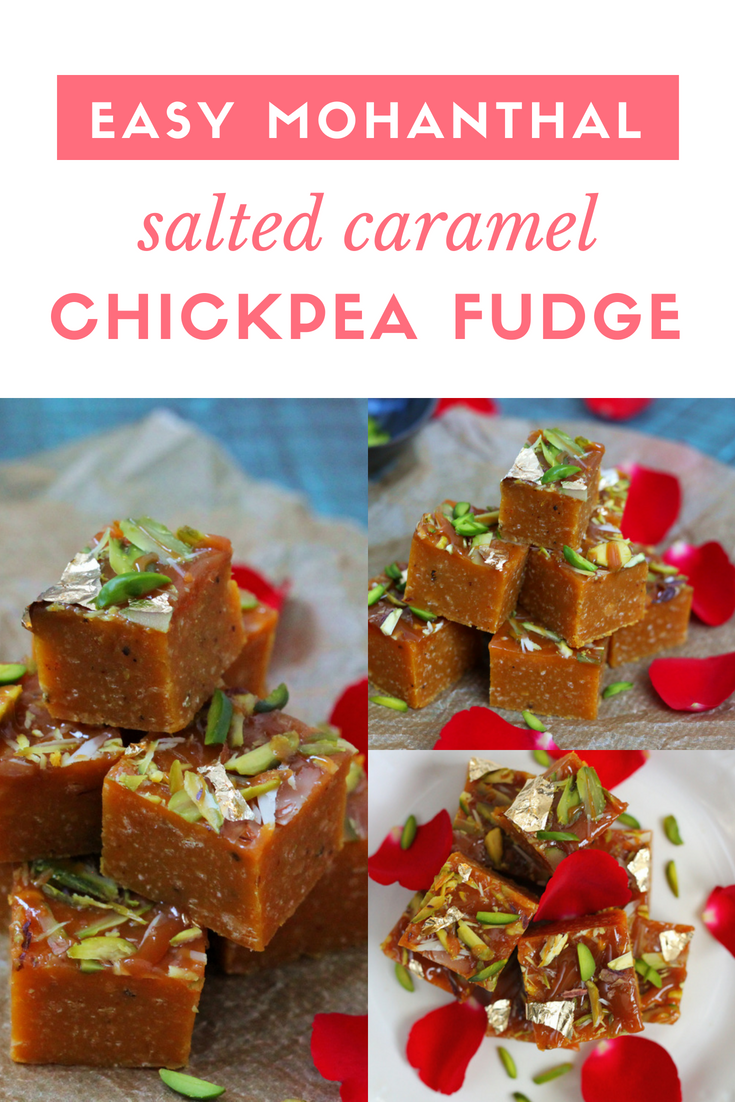 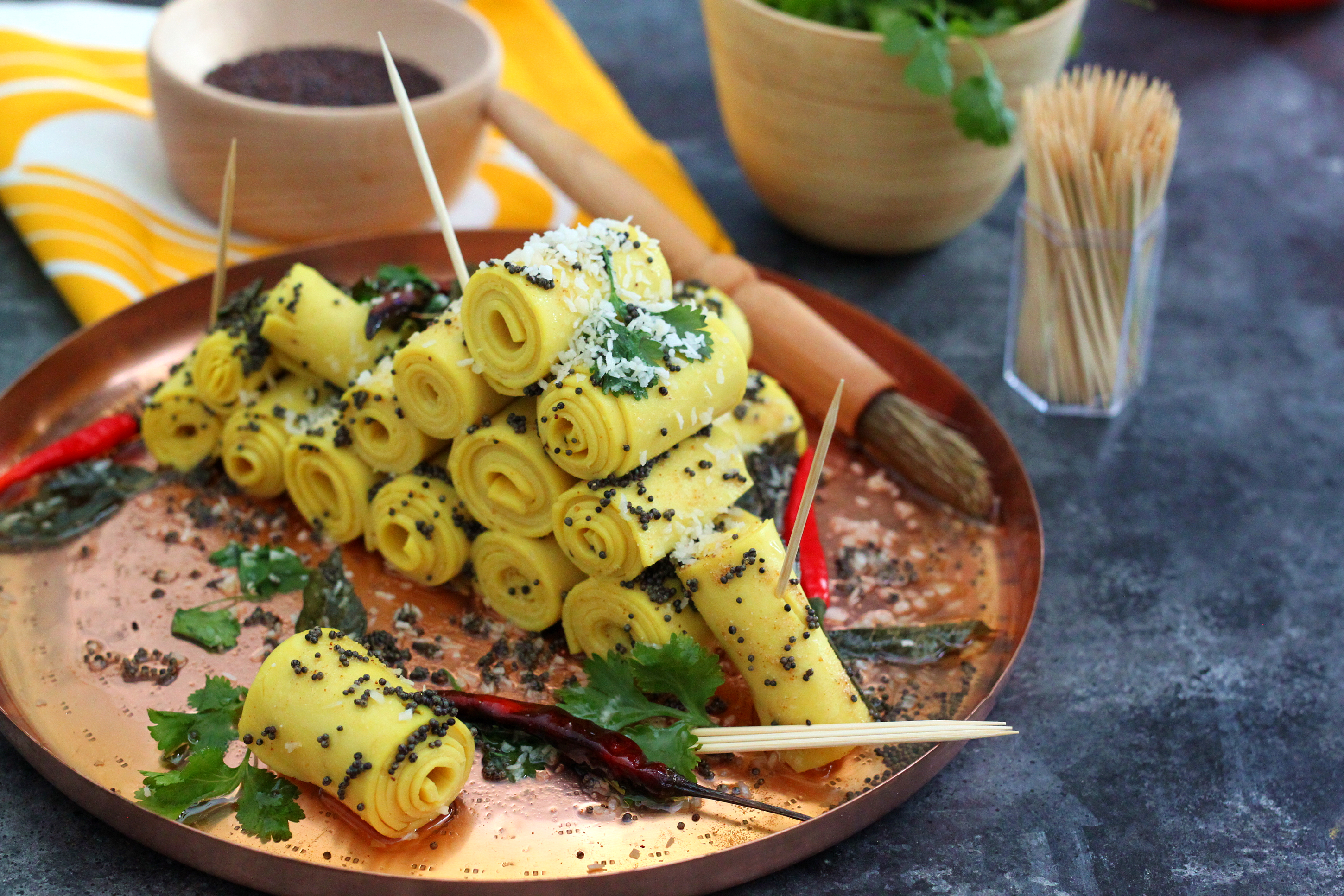 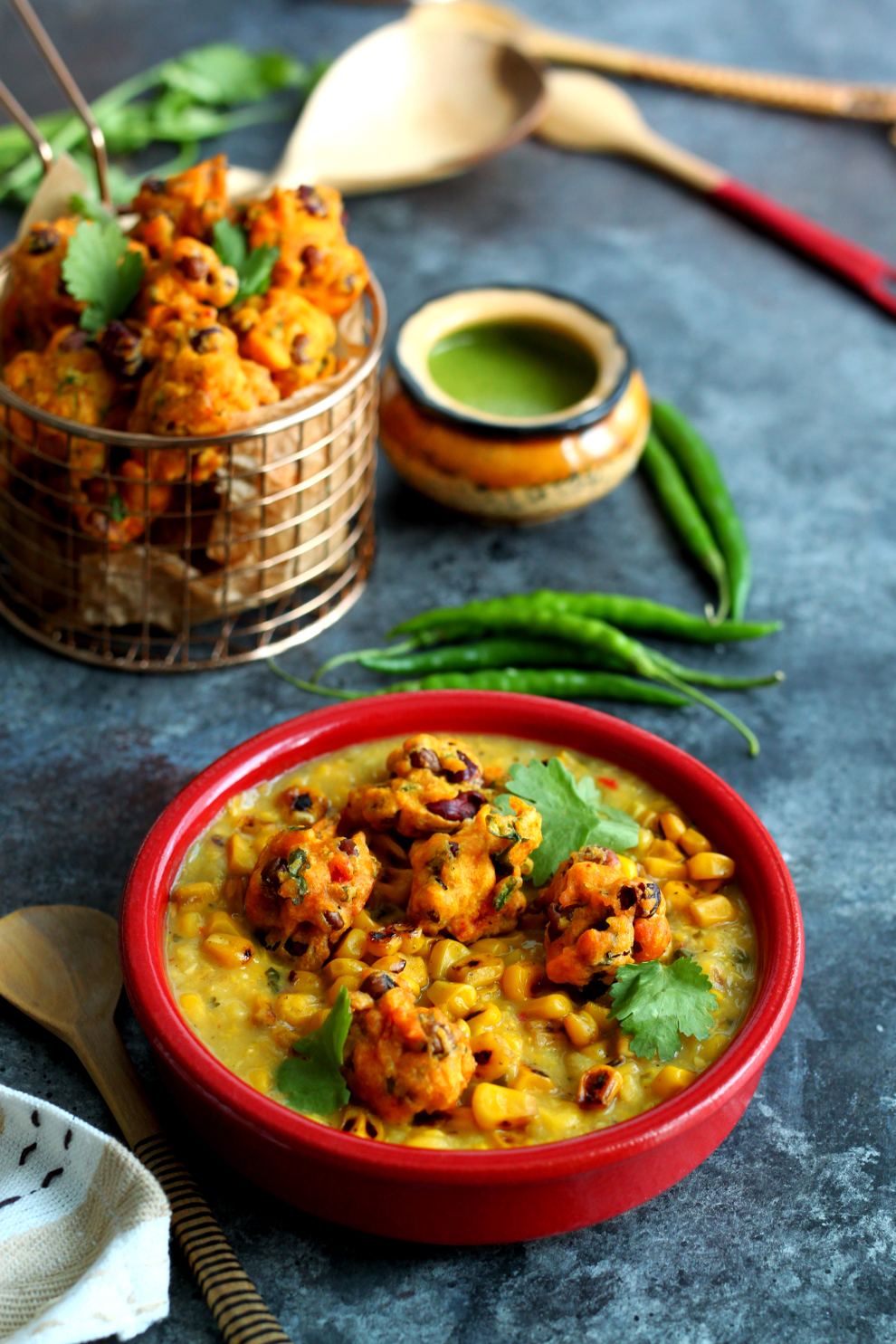 Hi sanjana, I don't see any recipe in this post.. am I missing it? Thanks, for all the lovely food you share with us!

I really need this recipe for our Eid celebrations.

Hi Sanjana, we have Eid coming up and I really want to make this mohanthal but can’t find the recipe. Please could you share? Please