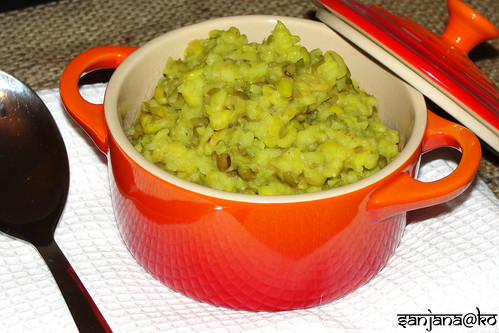 As promised, it is my pleasure to share with you a recipe in which turmeric is a key ingredient. Gujarati khichdi (pronounced: khiCHdRiy) literally translates to ‘mish-mash’- sounds appetising, right? Well maybe not, but it is one of the most comforting rice and lentil dishes in the whole world (at least in my eyes!) I have been eating it since I can remember; which is probably since I began to grow teeth! Every time I eat a big spoonful of this soft, nutritious, buttery Comfort I am teleported back to my childhood. It can be eaten on its own, mixed with milk for breakfast (although I think it’s good any time of the day!). Or with that other Gujarati favourite, kadhi.

If you are not familiar with this dish then you may be familiar with the British version Kedgeree, which is a similar rice dish made with eggs. Kedgeree was adapted from Indian khichdi to suit the appetites of British colonisers during the British colonial rule in India. I think it’s really fascinating how food blueprints tend to travel alongside human footprints, creating long-term impressions upon far away countries. Could we call them ‘foodprints’? Okay, neologisms are not where I was going with this…

Ah yes, khichdi; a mish-mash both comforting and delicious… It’s great for our diets whether we are 1 or 100!

I tend to mix the raw ingredients for khichdi and keep it in a tuppaware so it’s ready to go for whenever I like. This khichdi mix recipe will probably give you around 10 servings but don’t worry… You don’t have to cook it all at once. If you don’t want to keep any by for next time then just reduce the quantities of everything by half.

1 cup dried, split mung beans
1 cup basmati rice
1 cup broth mix or pearl barley (I like to add this instead of another cup of rice because it’s much healthier and much tastier!)

Mix this all up and transfer into a tuppaware. It will keep for a very long time! 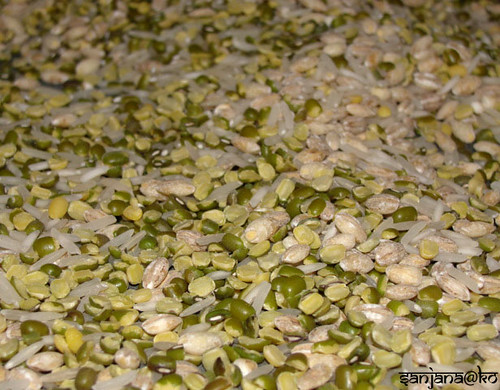 1. Use ¼ cup khichdi mix per person (or more if you’re hungry!). Wash it a couple of times to remove some starch from the rice.

2. Put the mix in a deep, non-stick pan and cover with cold water. Okay here’s where the really Indian method comes into play- You need to use you’re middle finger (yeah, the ‘giving someone the finger’ finger… hehe) to gauge how much cold water you need to add. If you touch the top of the khichdi mix (not the bottom of the pan) and fill the pan with cold water until it reaches the second of the three lines on your finger this will be perfect. Don’t ask me why and don’t ask me how. It just works.

3. Add a pinch of turmeric per person and bring this to the boil on a medium heat Cover for five minutes. Remove the lid and cook with the lid off until all of the water has been absorbed.

4. Season with salt, ground black pepper and butter/ghee if you like.

Please enjoy this authentic Gujarati classic as much as I do! And don’t forget to send in your entry for the Create for a Chilli Chopper competition (ends 31st December 2009 at 23:59 GMT)
C’mon guys, I’m waiting!

Update 21/12/09- Sorry I have been a little sidetracked recently. I totally forgot about picking these up… I would like to thank Ash and Vaishali for this award

And thanks to Anncoo and Sh for this one