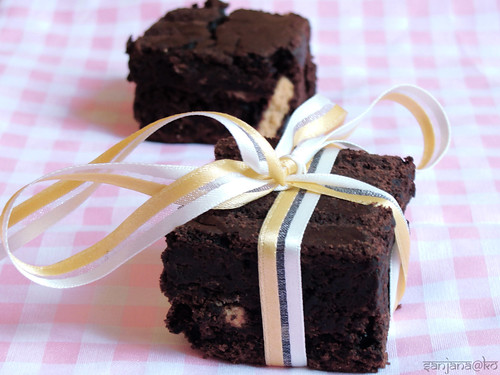 This. Is. It. You can stop the search. It has arrived: the ultimate eggless brownie. Oh, and did I mention that they can be made vegan too?

In other news, I would like to inform you that I will be absent for a short period of time due to education commitments. Bad times. Of course I would rather blog about my one true love in life (yes, I’m talking food) day in and day out but to get to where I want to be in the future, I must engage with the whole academic shebang. So I’m told.

So please don’t be offended if I’m not here to ‘ouhh’ and ‘ahh’ at your glorious recipes, for I will be drowning in the misery of English literature and would obviously prefer to be ‘ouhh-ing’ ‘and ahh-ing’.

I’m working on an essay at the moment regarding this extract from Edwidge Danticat; it is the Epilogue to ‘Women Like Us’, Krik? Krak! I would just like to share some pertinent lines with you:

Are there women who both cook and write? Kitchen poets, they call them. They slip phrases into their stew and wrap meaning around their pork before frying it. They make narrative dumplings and stuff their daughter’s mouths so they say nothing more. […] No, women like you don’t write. They carve onion sculptures and potato statues. They sit in dark corners and braid their hair in new shapes and twists in order to control the stiffness, the unruliness, the rebelliousness.

Are there women who both cook and write? Is it a myth that women who cook are chained to their stovetops, their husbands and a life of misery? Why has cooking been perceived as a ‘female role’ for so long and why has it taken so much time for this notion to become less of a worldly opinion? Or do these ideas still exist? Do we really live in a world free of stereotypes, or do we just think we do? And if there are women who both cook and write, then I assume I must be a Kitchen Poet. Although in writing I, and many other food writers aim to unshackle the mind and shine new light on ideas, not push them into the darkness. Open your eyes, your minds, your mouths and unleash the ‘rebelliousness’ because that’s real cooking. Then write about it. This is my liberation.

Now I must love you and leave you… With these purely decadent, dense and delectable brownies.

Parting is such sweet sorrow.

1. Mix all of the dry ingredients together and then add all of the wet ingredients. Mix thoroughly and transfer into a greased, lined tin.

2. Bake at gas mark 4 for 20-25 minutes. Poke with a skewer- it should come out semi-clean for a fudgy brownie or bake for a little longer for a cake.

3. Allow to cool for 10 minutes then turn out onto a wire rack. 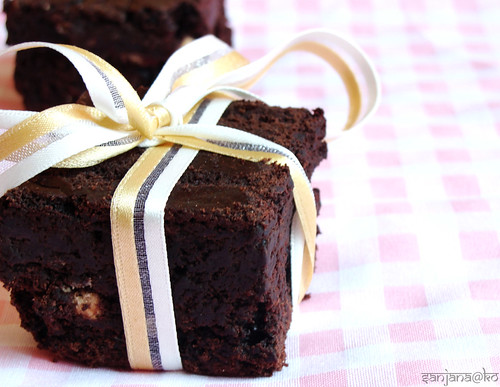 60 responses to “The Ultimate Eggless Brownies”