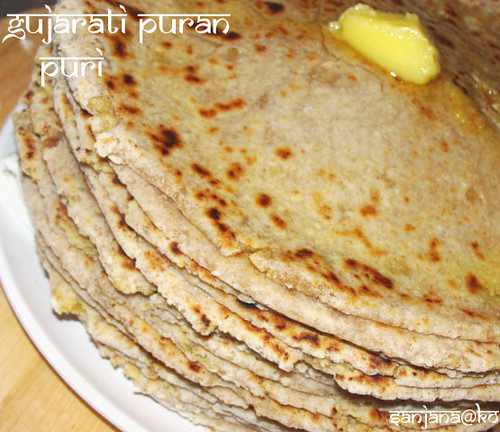 It’s a bit like a chapatti. It’s a bit like a stuffed paratha. But it’s also in a league of its own… because it’s sweet! This intriguing recipe was requested by a mysterious ‘Anonymous’ person in the ‘Ask Sanjana’ post where you are all welcome to request particular dishes or certain ingredients to be used in recipes. So ‘Anonymous’, this puran puri recipe is for you!

Puran puri is a very traditional sweet chapatti prepared in Gujarat as well as Maharashtra and South India. Although, each recipe varies according to the region in which it prepared for example; the type of daal chosen, whether sugar or jaggery is used and the choice of spices. I believe the difference in recipes is indeed subject to regional differences, yet it also varies according to personal differences. I prepared mine in the Midlands of England so it’s totally permissible that I made my puran puri recipe up using what I thought would taste good *wink wink*. Having ever eaten only Gujarati puran puri, I went by the model I am familiar with and prepared it on a tawa (lodhi), almost roasting the spicy-sweet, rich filling encased in soft, toasted coconut spiked dough . Coconut you say? Since when do Gujarati’s put coconut in their puran puri?

Since I made it last night! 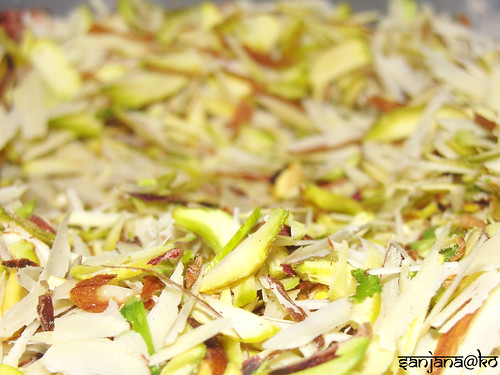 The non-traditional flaked almonds and pistachios… a successful impulse addition

1. Boil the two daals separately until tender but not so that they loose their shape. If you don’t have a pressure cooker to do this faster then add a pinch of baking powder when boiling the daals. Drain and set aside.

2. Heat 1 tsp of ghee in a wide non-stick pan and add the cooked daals and sugar. The mixture will become a little loose once you add the sugar but don’t worry as this is normal. The mixture will thicken as you cook it.

3. Cook this mixture on a medium flame until it becomes dry then add the cinnamon, cardamom, saffron, nuts and mace. Stir and set aside to cool.

4. Once the mixture has cooled, roll it into ping-pong sized (or a little larger) balls and set aside while you prepare the dough. 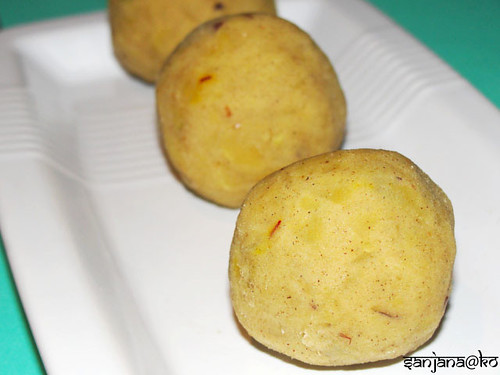 5. Mix the flour and coconut powder in a large bowl and make a well in the middle. Add the oil and water and mix with a spoon until you are able to handle it without burning yourself. Once it has cooled, bind it into a dough and roll it into balls (bigger than the filling balls but smaller than a tennis ball).

6. Use the same step-by step rolling procedure as I used in THIS Aloo Paneer Paratha recipe to roll your puran puri (making them smaller if your wish).

7. Cook them on a tawa or a dry non-stick frying pan (if you do not have a tawa) until toasted and aromatic. 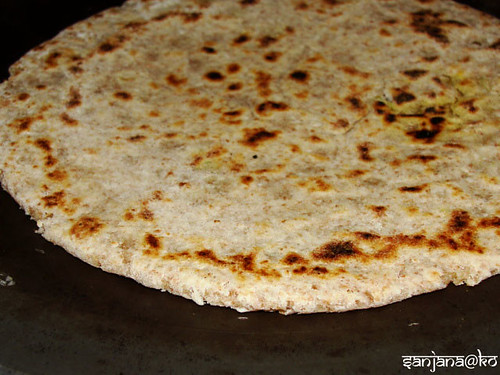 Too hot to handle. Heh.

8. Spread with plenty of ghee and enjoy!

I served mine with plain kadhi like this one without the peas and paneer. I made the kadhi thicker by adding less water and spicier by adding an extra chilli. The sweet, aromatic puri compliments the hot, thick, sour kadhi so beautifully…

It’s a fact– Hot, Sweet and Sour are like our families and friends; we may be total opposites when it comes to our personalities, we may think that we can never work together… but in the end, we realise that we’re made for one another. 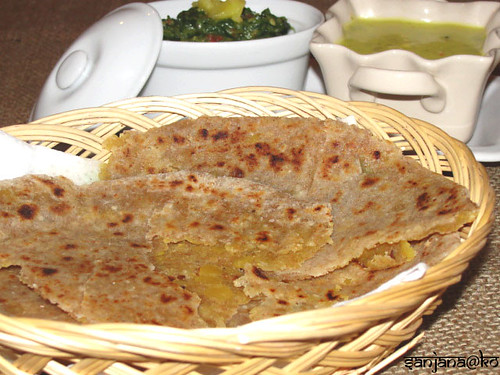 This is so tempting... u have a nice space here and a lot of gujarati recipes... I love Gujrati food... following u...

Oh yes, this is bookmarked ;)

Oh, that looks and sounds so delicious! I've never heard about it before but I would love to give it a try, thanks for the recipe:)