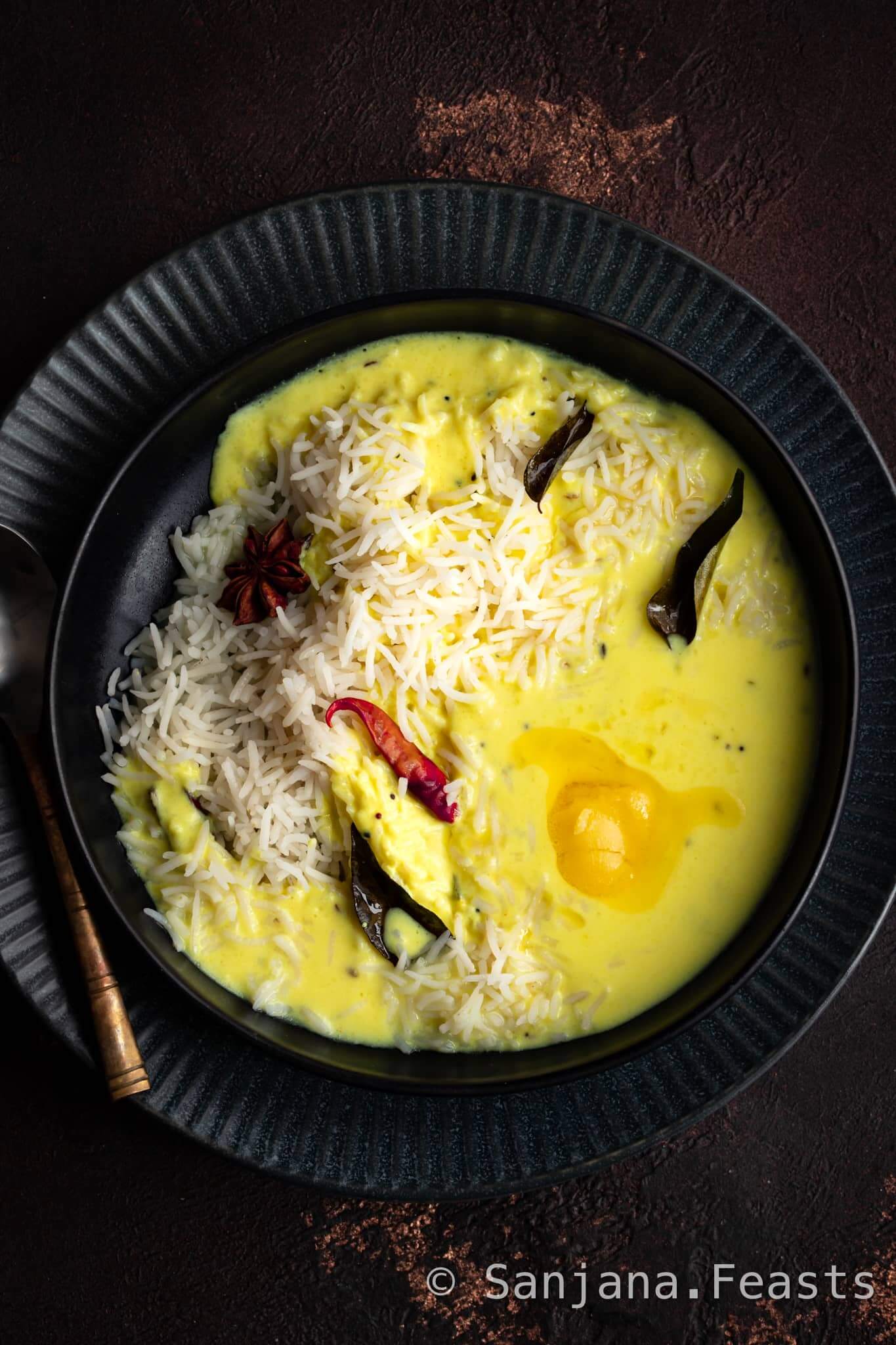 Gujarati Kadhi is a belly-warming concoction of spiced yoghurt and gram flour. It’s light comfort food typical of this coastal region of India, although many regions have unique takes on the dish.

My favourite version of Kadhi is hot, sour and slightly sweet. Traditionally, we eat Kadhi with rice, khichdi or rotli. It can be a one-bowl meal you enjoy with a spoon and nothing more.

Where does Kadhi come from?

Kadhi is a dish with roots and shoots in multiple South Asian cultures. Across India it is prepared in many regions. Each take has its’ own unique nuances specific to the land and local tastes.

The dish almost always contains gram flour (besan or chickpea flour) as a thickening agent. Many versions use yoghurt, but not all. Spices and additional ingredients also vary from region to region. Let’s explore some of these.

Note that within regions, there are a number of variations of Kadhi. Below is simply a high-level exploration of some popular variants.

Sour, spicy, sweet and usually very fluid in consistency. This is the Kadhi we will make today. It’s the version I’ve grown up with. This version of Kadhi is prepared with a sour yoghurt and chickpea flour base. The spices, of which there are many, are aromatic but added in moderation.

We typically eat this Kadhi with rice, rotli or khichdi. It’s often a thali addition, as well as popular on wedding menus.

In Gujarat, a variation of Kadhi called Fajeto is prepared with fresh mango for a fruity take on the dish. Bhinda (okra) ni Kadhi is a popular style in Gujarat, too.

Often thick in comparison to the Gujarati counterpart, Punjabi Kadhi is soul in a bowl. It’s traditional to serve this type of buttermilk-based Kadhi with Pakoda; these are fried besan dumplings which fill out the Kadhi beautifully. A side of rice is not uncommon either.

The spices in Punjabi Kadhi usually include (but are not limited to): Cumin, black peppercorn, red chilli, fenugreek and turmeric. The Pakoda often contain onions, methi and other spices so this style of Kadhi certainly does not lack in the flavour department.

A vegetable-packed flavour ride. Sindhi Kadhi requires you to first roast the besan for glorious nutty notes. A concoction of tamarind pulp, curry leaves, jaggery, spices and an array of vegetables then go in. Serve hot and sour Sindhi Kadhi with rice and maybe some papad for a balanced one-bowl meal you’ll crave often.

Rajasthani Kadhi is yet another delicious style of Kadhi. The tempering (tadka) is usually left until the end and then poured on top once the gram flour and sour yoghurt mixture is ready. Serve it plain with rice, with Pakoda or with gatte (boiled gram flour dumplings) or millet roti for a filling meal.

Other Rajasthani Kadhi recipes call for whey in place of yoghurt. This style of Kadhi is thinner and lighter in appearance. The hot and sour flavours of this nutritious version shine.

Takachi Kadhi is a sour yoghurt and gram flour Kadhi, usually without Pakode. Indeed, it resembles the Gujarati style of Kadhi I grew up eating most closely. Hot and sour flavours and a side of rice complete the meal.

Solkadhi is a yoghurt/buttermilk preparation from the Konkan region which stretches from Goa to Maharashtra. It’s typically a refreshing summer drink with the addition of kokum (sour dried mangosteen). It has a beautiful blush hue from the kokum and this ingredient also ensures this style of Kadhi boasts lip-smacking tangy flavours.

A style of Kadhi rich with ghee and/or homemade butter. Haryana Hara Choley Kadhi includes raw green chickpeas, seasonal greens like melon or bathua (goosefoot). The latter is a speciality of northern India and Pakistan and a common ingredient in Saag.

Serve this version of Kadhi with Pakode, roti or a side of rice.

The list goes on. There’s no shortage of unique and delicious takes on Kadhi. Indeed, I’m yet to explore the varieties of Kadhi from Pakistan.

What are the ingredients for Gujarati Kadhi?

Why does Kadhi split?

Upon contact with heat, yoghurt can often split or curdle. To prevent this, ensure you don’t heat the Kadhi too quickly. Whisk or stir the mixture all the time for even heating. Constant agitation will also mean the ingredients have time to emulsify and thicken properly.

The chickpea flour (besan) will also help to stabilise the Kadhi mixture and prevent splitting. Some say salt can cause Kadhi to curdle but this is something I am yet to experience.

Split Kadhi will look like small flecks of white yoghurt and a watery liquid, similar to what you may see in cheese making. Cooking the Kadhi too quickly can cause the fats to over-heat and separate.

What to do if Kadhi splits

It can be saved! If your Kadhi splits, add 4-5 ice cubes and wait for the Kadhi to cool down. Remove the whole cloves and cinnamon. Transfer the split Kadhi mixture to a blender and add a tablespoon of chickpea flour (besan). Blend until smooth and return to the pan.

Next, cook the mixture stirring all the time until smooth and creamy. Simmer for 15 minutes or so to cook the additional besan out. The blending will mean some spices are ground into the Kadhi but that beats a split Kadhi in my opinion! You can always do another tempering on top if you like.

How to make Kadhi sour

Please do your utmost to find the most sour yoghurt possible. It makes all the difference. I find my local South Asian shop stocks ‘desi’ style yoghurt which is a set, plain yoghurt and extremely sour. It’s perfect for Kadhi.

Of course, this may not be possible for you. The next best thing to use is Ayran or doogh (plain, still) from Middle Eastern shops. This is a savoury yogurt-based drink. It’s so delicious and makes for amazing Kadhi.

If you can’t find any of the above, feel free to add the juice of a large lemon to your yoghurt.

How to make vegan Kadhi

For a dairy-free Kadhi, swap plain yoghurt for soy or coconut yoghurt. These products are not nearly sour enough for Kadhi so you may find you need to add lots of lemon juice. The yoghurt should have a seriously sharp tang before you use it.

Temper the spices in oil in place of ghee. Easy!

How to serve Kadhi

Every regional variation of Kadhi will be served in its’ own unique way. Kadhi-Chawal (kadhi and rice) being the most common. This Gujarati-style Kadhi is typically accompanied by rice (bhaat), a simple curry like dry mung beans or okra. Khichdi is also a common side dish alongside Gujarati Kadhi.

My favourite ways to eat Kadhi are with Matar Bhaat or simply with Soft Gujarati Rotli. 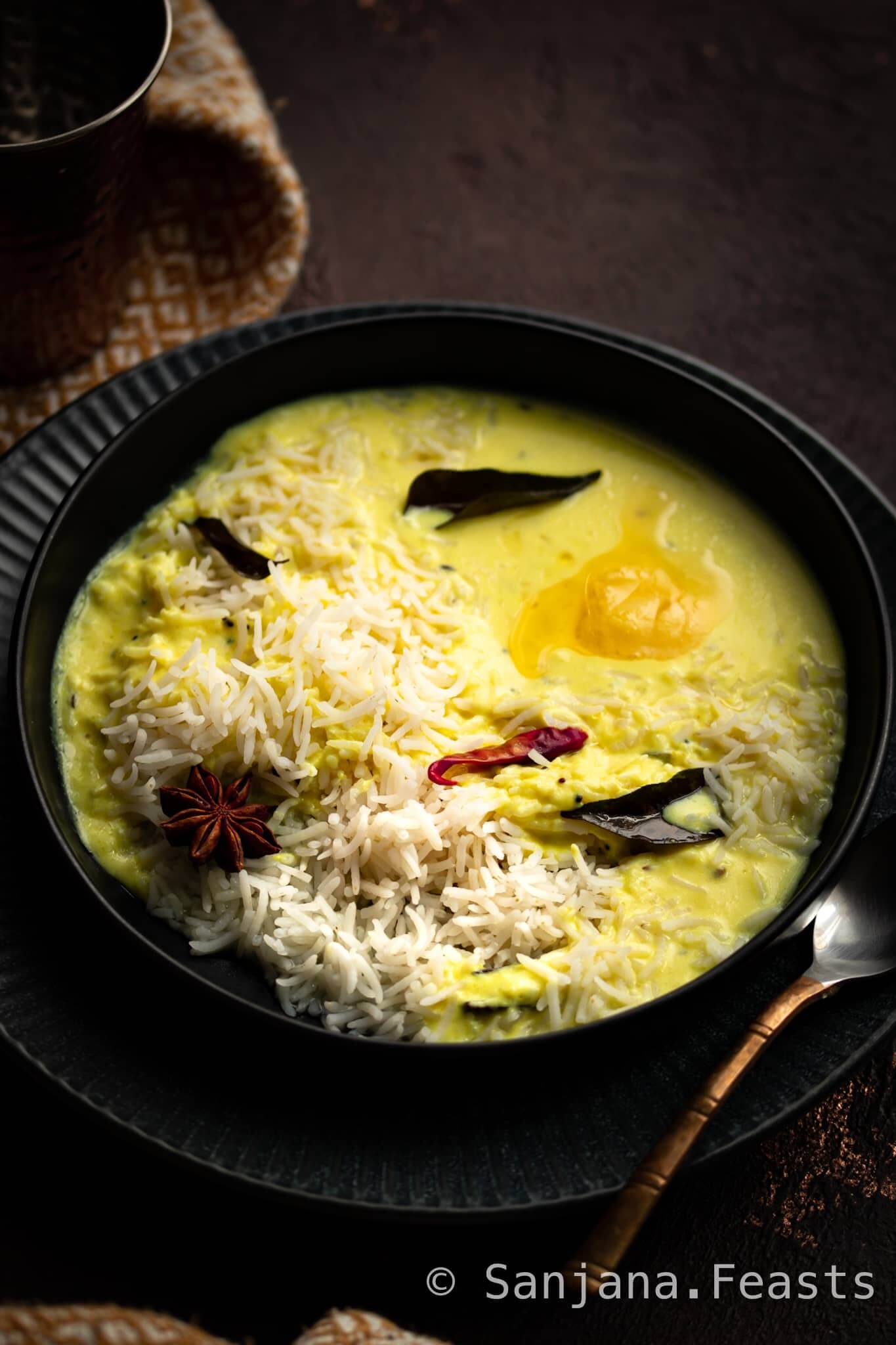 If you like this, you’ll love my recipe for Matar Bhaat 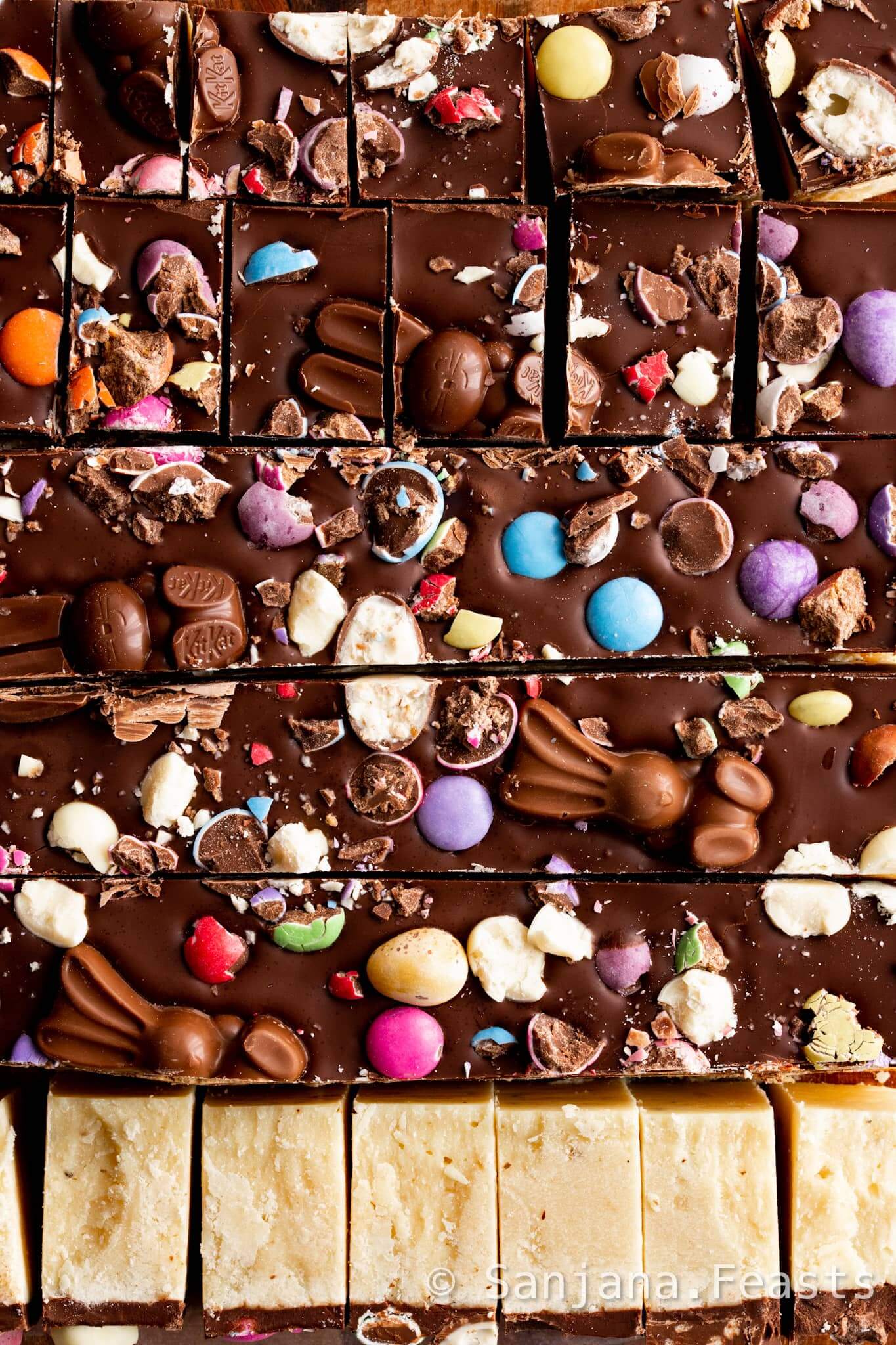 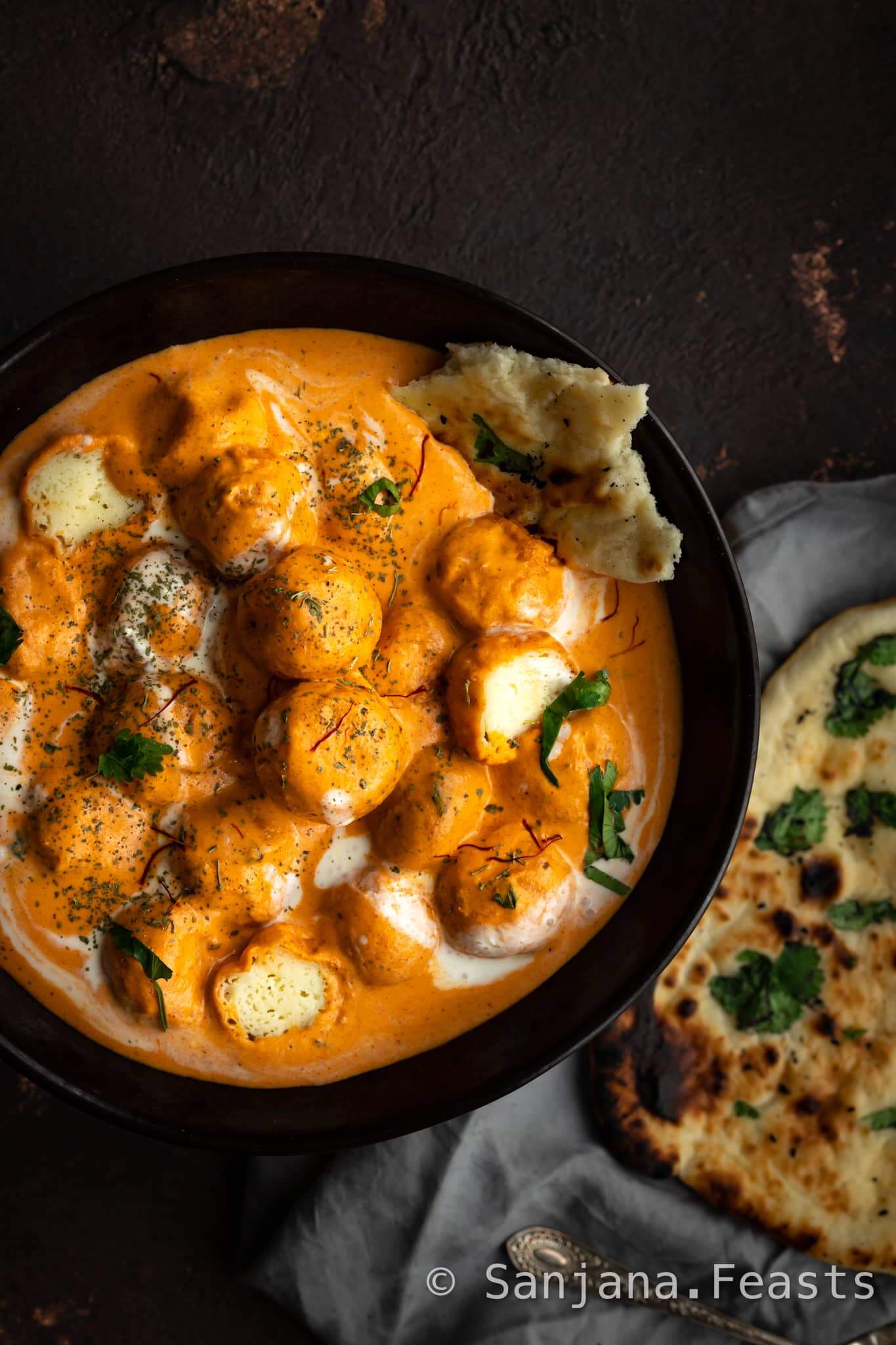 Always have it with a dollop of ghee. My favourite comfort food along with Khichdi.