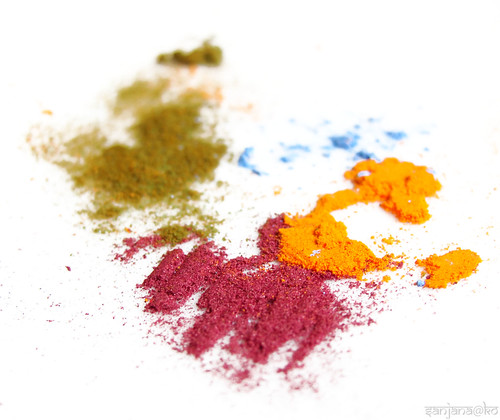 Today’s post is dedicated to the spring festival Holi and the patron saint of Wales, St David. Today is the first day of the Indian festival of colours, Holi (which can last up to sixteen days! Now that’s my kind of festival). Tomorrow is St David’s Day (I bet Wales will be buzzing!)

One way in which Holi is celebrated is through the burning of Holika, the sister of the king of demons Hiranyakshapu and aunt of Prahlada. Hiranyakshapu prayed for thousands of days and nights to Lord Brahma (the creator) in order to be granted a boon. He asked to be worshipped as God himself; to be protected from dying ‘during day or night; inside the home or outside, not on earth or on sky; neither by a man nor an animal; neither by asthra (a weapon) nor by shastra (sacred means)’.The story states that Hiranyakshapu’s young son Prahlada, a devotee of Lord Vishnu (the preserver) was ordered by his father to sit on a pyre, on the lap of his aunt Holika (who was to be protected from flames by a magic shawl). Magically, Prahlada was protected by his beloved Lord Vishnu due to his constant chanting of ‘om namo bhagvate Vasudevaya.’ These submissive words of love to Lord Vishnu moved the protected blanket onto the young child, perishing Holika in the process. Don’t feel bad, it was in her karma to die this way. And she was the sister of the demon king. She had it baaaaaaaaaaad.

In the end, Lord Vishnu appeared on earth as Narasimha. He was not a man or an animal. He was half man, half lion. He didn’t kill Hiranyakshapu during the day or at night. He killed him at dusk. He didn’t kill him inside the home or outside. He killed Hiranyakshapu on the terrace of his home. He didn’t kill him on earth or in the sky. He was killed in the lap of Narasimha. He did not die by either asthra or shastra. He died by the deadly claws of Narasimha himself. If you are interested in learning a little more about these stories then the Vishnupuran DVD’s are really good for kids and adults alike.

This is just one story of Holi; others state that Lord Krishna innocently complained to his mother about the dark colour of his skin. He protested that his love, Radha had beautiful fair skin and so his mother coloured Radha’s face in bright, beautiful colours. This is one of the reasons for the charming ‘throwing of coloured powders in each others faces’ celebration during Holi. Fun, right?

Holi is celebrated in so many different ways throughout the East Asian subcontinent by Hindus, Buddhists Jains, Sikhs and many other religions for numerous reasons. I’ve just shared with you what I know about the Hindu Holi celebrations. For many regions, Holi is also significant for agricultural reasons (harvesting crops etc). If you know any more about Holi or St David’s day then please leave lots of interesting comments… I’d love to hear more stories!

Okay, so that was a pretty brief explanation of what I know about Holi (I know it’s hard to believe seeing as though I blabbed on for such a long time). Now, I bet it has already dawned on you that I know significantly less about St David’s Day. However, I do know that he was a vegetarian. See, we have some things in common. We both love leeks. That’s pretty much it really. Okay, so that’s all I know about St David and his day. Please can some compassionate soul educate my depraved mind?

Why have I been going on about random things for so long? What I’ve been meaning to say it that today’s post was initially created for St David’s Day and later inspired by Holi. I would like to say thank you to Mr (St) P (Pete) of Delicious Delicious Delicious for sending me the first prize for his Re-Inventing the Lamington Competition. It was a beautifully intricate, and not to mention enormous Welsh Dragon shaped cookie cutter. 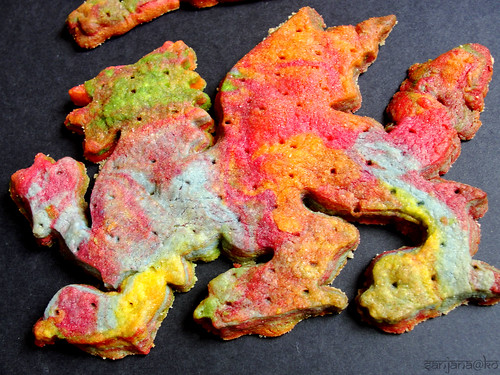 I wanted to say a big Happy Holi and St David’s Day in the form of shortbread biscuits!

Now I have to admit, some of these guys were more compliant than others. Some just didn’t wanna leave their mama (the cutter herself) and got decapitated as a result. I’m not gonna lie, there were various dragon limbs and body parts all over the place.* It was pretty horrific. Lucky for them, I know how to patch up cookie dough. Unlucky for them that I only know how to do it badly. 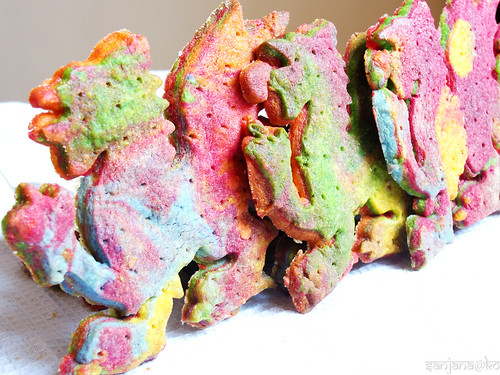 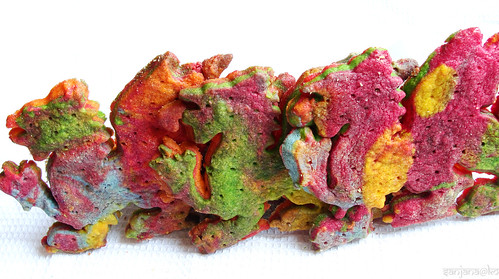 1. Beat together the butter, sugar, vanilla and strawberry extract.

2. Sift in the flour and combine to make a dough. Divide the dough into equal portions and add in the colours one by one. If the dough becomes too soft and warm immediately place in the fridge and proceed when it is cooler and firmer.

3. Wrap the doughs in cling film separately and chill in the fridge for 30 minutes. 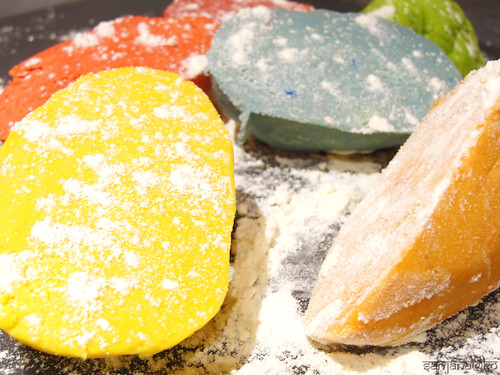 Anyone for a spot of Play Dough based crafting?

4. Remove from the fridge and take off the cling film. Dust your surface with flour and combine the colours in any way you like. Once you have your rainbow dough, wrap it up again and return to the fridge for 15 minutes. 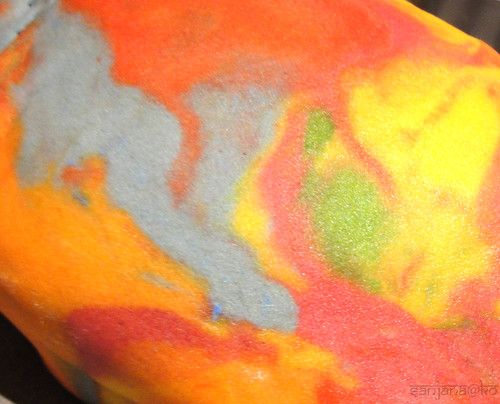 5. Remove the dough from the fridge and take off the cling film. Roll it out on a floured surface until it is about 3-4mm thick.

6. Get cutting with your favourite cookie cutters. Or roll into slightly flattened balls for shortbread thumbprint style biscuits. 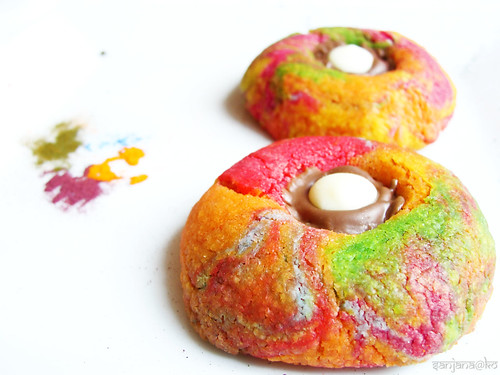 7. Place the cut out shapes on a greased, lined baking tray and chill in the fridge for 5 minutes (yeah I know there’s a lot of ‘fridge’ involved, but the butter should remain cool for the shortbread to be light and crumbly). Make holes in the biscuits with a fork and top with a little extra caster sugar if you wish.

9. Remove from the oven and allow to rest for 5 minutes, then carefully transfer to a wire rack. 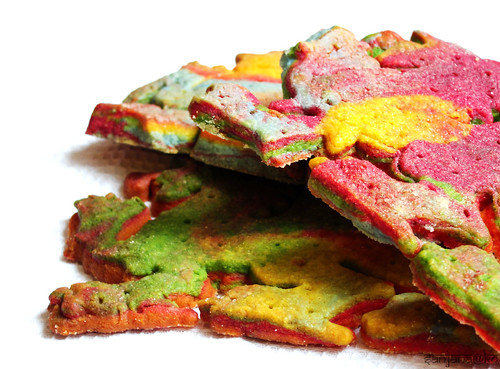 Have a roaring Holi and St David’s Day!

*Note: No actual dragons were harmed in the making of these delicious strawberry shortbread biscuits.

I just love the way your colorful cookies look! I have that cutter, now I have to try it myself!

What a treat!!! I promised the kids in the art and culture club that I lead (in Cleveland Ohio) that we would encounter Welsh dragons this week... and I think they will love yours the most. Who wouldn't?

Don't know how I missed this post! These are most beautiful cookies I have ever seen. They look gorgeous and delicious! I wanna have one right now? Send me some pls :)

Wow. I have never seen a) this colorful dough and b) dragon shaped cutter. Agree with you, it must have been a nightmare to try to free them :-)

My first time here and loving it. The pictres surely speak for themselves. Nice job :-)