I’ve always been one to get excited when a great big parcel gets delivered to the house. Itching to get my paws on the contents, I rip at packages, chipping nail varnish and not batting an eyelid over it – very strange behaviour.

Recently, the lovely people over at Pataks sent me some sample jars of their curry sauces – Tikka Masala, Phal and Vindaloo (which had unfortunately broken during transit even though they had packaged them up well). Spying the package on the doorstep, I pounced on it, desperate to find out what was inside.

I don’t usually use store-bought curry pastes or sauces, especially Indian ones but I was intrigued to find out how they worked, anticipating that I’d have to make many alterations to suit my taste. This was definitely not the case.
Phal, the jar which I was most drawn to, was adorned with several chilli images indicating it was going to be super spicy – just how I like it. And of course, there’s no better way to use a spicy curry paste than with mild, creamy coconut milk and plenty of crunchy veggies.

It had been decided, I was to make a deliciously spicy Curried Coconut Noodle Soup, packed with vegetables from baby corn to exotic mushrooms and light rice noodles. A shower of crunchy beanspouts scattered on top finishes the dish off perfectly.

I popped open the lid, had a little taste and cockily sniggered that it was far from spicy. After heating the sauce in my wok, I tasted again and pretty much ate my words. I won’t lie to you; I was close to tears. The chilli was brought alive by the heat from cooking and unless you’re hardcore, you will need plenty of coconut milk to douse the flames.
There are no heroes when it comes to Phal.
Curried Coconut Noodle Soup
(Serves 4)
Ingredients
70g green beans, trimmed and halved
70g baby corn, sliced lengthways
70g cabbage, finely sliced
150g fried tofu, sliced into strips
50g mixed mushrooms, (I used chestnut, Enoki and Honshimeji)
50 beansprouts
175g Pataks Phal curry sauce (1/2 jar)
800ml light coconut milk
300g rice noodles, cooked
4 kaffir lime leaves, sliced
1 star anise
2 tsp tamarind paste
3 tbsp sugar
1 tsp salt
Method
1. Heat the curry sauce in a large wok until bubbling – about 5 minutes. Add the lime leaves, star anise, sugar, salt and tamarind.
2. Pour in the coconut milk and bring to the boil. Add the green beans, baby corn, tofu and mushrooms. Simmer for 4 minutes. Add the cabbage, beansprouts and rice noodles. Cook for a further 4-5 minutes.
3. Remove from the heat, pile into bowls and garnish with more beansprouts and tofu strips.
Pataks products can be bought in all good supermarkets, Indian food shops and online.

Enjoy this light and spicy dish for lunch, dinner or if you’re a spice addict like me – devour it for breakfast.

Want brand new recipes before anyone else? Follow me on Twitter and Facebook for fresh recipes straight from the kitchen, ask me cooking questions, see what I’m munching my way through during the week or just tweet to say hello.

I have not been paid for creating this recipe or writing this post. All opinions are my own and have not been influenced by the brand or any other factors. 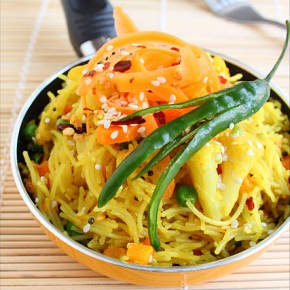 Next →
Chilli and Sesame Vermicelli
Click here to cancel reply.

Hi ,Sanjana,I read and try your recipes from long time .These are fabulous. My daughter is in her teens and she is very health conscious.Can you please suggest me some carbs free with less calories food so I can feed her with all nutritions.I will be really thankful to you.

Wow.......I am yearning for some now looking at this awesome preparation & cool pics.

Looks like i missed some of your post! This soup with coconut and noodle and those mushroom .. SIGH!! stole my heart.

I'm bookmarking this for a morning I just CANNOT get moving. This looks like it will definitely put a fire in your belly :) Lovely soup! Buzzed

I love coconut curries or soup, basically anything that has coconut milk in it :)

Love your soup recipe, I will have to try that jar too now :)