There are some flavour combinations that just shouldn’t be messed with. Mint and chocolate is one of them.

The Mr isn’t a fan of desserts. I’ll often spend hours in the kitchen trying to perfect eggless and vegan cakes, cheesecakes, cookies and brownies. Yet no matter how happy I am with how one might have turned out (which, I’ll be honest, doesn’t happen often), he still won’t touch it. Unless it’s mint chocolate.

I’ve never met anyone who doesn’t like ice cream. That changed when I met my husband. I’ll be honest, I thought it was super weird. The one exception to his no-ice-cream rule is mint chocolate, it has to be totally frozen (soft serve is never an option), topped with strawberry syrup and hazelnuts.

So here I am. It’s Valentine’s Day – which for the record, I think is a load of old bollocks. We don’t do presents and ridiculous extravagant gestures – we never have and never will. However, it isn’t very often he doesn’t work weekends so when we get the chance to spend time together, we make the most of it. Why do people need to ‘prove’ to the world they love each other on one day of the year? Usually it’s for the benefit of their Facebook ‘friends’. People should treat their other halves with love and kindness every day. Full stop.

Okay, that’s my little rant over.

This is one of those weekends where we’re both home so we decided to spend the day cooking. I love it when we do this.

Our ultimate menu of Paneer Butter Masala, Garlic and Coriander Naan, Gujarati Kachumbar and these Eggless Mint Chocolate Fondants and Fennel Seed Crème Fraîche is complete. The latter because it’s the only dessert he’ll eat.

I’ve been working on this recipe for a long time and now I’m finally ready to share it. The ingredients required are very different from a conventional chocolate fondant but the result is spectacular. A combination of things including baking powder, milk powder and cornflour work to do the job of eggs in my recipe. The batter recipe is perfect and provided you follow all the rules (because making chocolate fondants, a.k.a Moelleux au Chocolat ain’t a joke), they’ll be crisp on the outside and gooey in the middle.

Once baked for just 10 minutes, they need to be turned out and served immediately. If they’re not, they’ll carry on cooking and the middles will be light and fluffy rather than having the lava-like centre you really want.

Mr Patel, this one’s for you… but not because it’s Valentine’s Day. 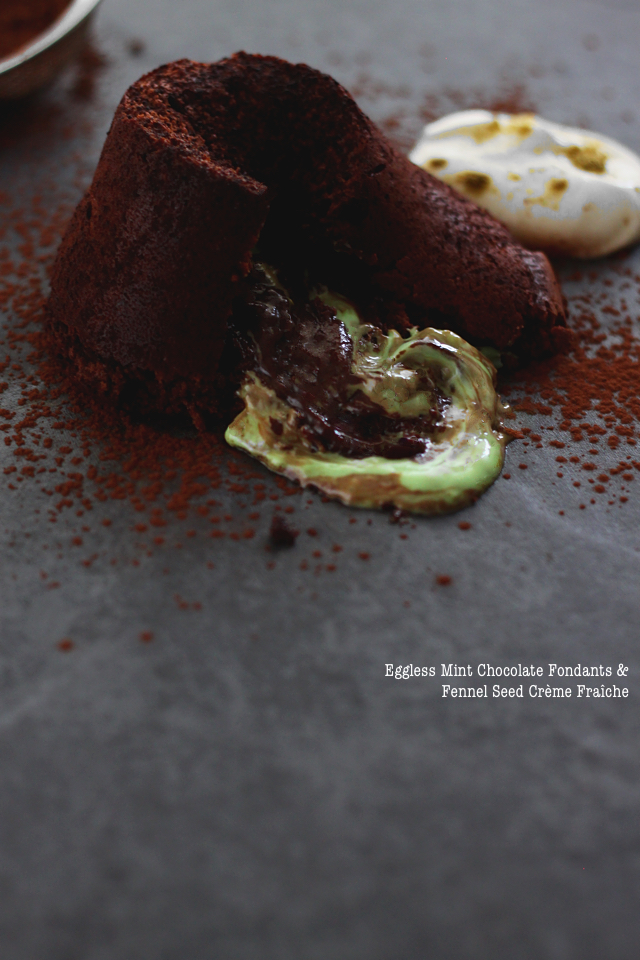 For the Fennel Seed Crème Fraîche:

2. Grease 6 dariole moulds and place a disc of greaseproof paper in the base of each.

3. In a stand mixer, combine the sour cream, condensed milk, melted mint chocolate and melted butter until smooth and light.

4. Add in the milk powder and continue to whip until fluffy.

5. Next, add in the flour, cornflour, and baking powder.

6. Beat until just incorporated – do not overmix.

7. Fill the moulds to just under half way. Pop in two (or three) Mint Aero Bubbles and cover with more batter. The moulds should be filled ¾ of the way up. Repeat for the next 5.

8. Place all of the fondants on a baking tray and bake for 10 minutes exactly.

9. Remove from the oven and immediately turn out onto a plate.

10. For the Fennel Seed Crème Fraîche, whip 200g Crème Fraîche with 1 tsp freshly-ground fennel seeds. Serve alongside the fondants for a lovely, fresh balance against the rich chocolate + a hint of spice.

The perfect way to round off any Indian meal.