I’m a massive clinger. Ever since the summer sun disappeared behind these pesky autumnal clouds, I’ve been doing everything in my power to cling on to the warm days which were so quickly snatched away from me. Sniff.

Due to my recent bitterness towards not receiving delicious freebies on my doorstep like a certain Mr. P, I enquired about sampling some Greek yogurt from Total. Fage Total are specialists in yogurt making and their product range includes choices for all kinds of yogurt lovers. Their full fat Greek yogurt is exactly the thing I need for making Shrikhand. They even have 0% fat and 2% fat Greek yogurts which are perfect for cooking.

I’ve been rambling on about Shrikhand for absolutely ages, teasing you with recipes like Eggless Saffron and Lemon Shrikhand Cheesecake and Shrikhand Spice Lamingtons. Evil, no?

In all seriousness, I’ve actually been meaning to do this for a long time and thanks to Total, I finally had the motivation to get it done. I chose to combine my sweetened, spiced yogurt with summer berries because I’m so peeved about the fact that they’ve just gone out of season and I hardly got a chance to use them aside from my Chilled Sunshine Berry Soup. Bah, humbug!

If you haven’t been paying attention to my previous posts and don’t know what Shrikhand is then listen up. Shrikhand is a popular Indian dessert made from hung yogurt which is sweetened with sugar and flecked with spices. It is traditionally served with plain puri (little fried breads) and it can also be blended with short grain rice to make a dessert called ‘phirni’. Double delicious.

You can use any kinds of soft fruit in your Shrikhand; mandarins being my favourite. I learnt to make Shrikhand when I was around ten years old and I remember using half a can to decorate it and the other half to satisfy my belly. Better than biscuits, I suppose.

While I was at it, I tried a couple of variations on traditional Shrikhand which I have been curious about. However, I’m afraid that curiosity killed the cat. My results indicated that pandan Shrikhand is a massive no-no, as is honey Shrikhand (because of the spices). I never said they were some of my best ideas.

You need to use both Greek yogurt and sour, natural yogurt because using just Greek yogurt will leave you with a very bland tasting dish. It’s the mixture of sweet, creamy and sour which makes Shrikhand such a wonderful dessert.

1. Tip both of the yogurts into a clean muslin cloth and tie it up tightly with a piece of string right above the top of the yogurt so that the water can drip away.

2. Tie the muslin somewhere where it can hang with a large bowl underneath to catch the water and leave it for 24-48 hours. Keep tipping away the water as the bowl fills up.

3. Remove the yogurt from the muslin and place it in a large bowl. Add the sugar and mix well.

4. Press the yogurt and sugar mixture through a fine-holed sieve to remove any lumps. Work those biceps.

5. Mix in the cardamom powder and then gently mix in the frozen summer berries. Garnish with the pistachios. Chill in the fridge until you’re ready to serve.

You can’t really go wrong with summer berries. I wanted to replicate the charming look of cheap and tasty raspberry ripple ice cream where streaks of crimson stain the creamy whiteness of the vanilla ice cream. What I ended up with was a pretty pink Shrikhand with specks of deep purples and reds. Note: If you want the former effect, don’t stir it too much.

I have a couple more recipes to post using Total Greek yogurt so keep your eyes peeled for those. I initially did a step by step for this recipe but there was a whole load of hoo-har with the images and my scatterbrain. In other words, I accidently formatted the memory stick with all of the shrikhand pictures and the beautiful snaps from my cousins wedding. You can come around and slap me if you like. 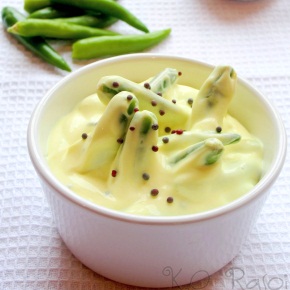 Next →
Whole Chillies in a Zingy Mustard Yogurt
Click here to cancel reply.

Hi. In India phirni is made With milk and rice paste. Much like kheer or rice pudding. An easier way to remove excess water from yoghurt is to spread it on a cheesecloth which is then put on a pile of napkins- I use cloth but can use kitchen napkins.. the water would be absorbed faster

Lovely blog you have here, Sanjana, thanks for stopping by at mine. And congrats on being published by Foodista ;)

Very good - I use Greek yogurt all the time!! Traditional srikhand comes out very well too.

(You asked for that.)

I had firnee in Singapore! But as you can see, they spelled it differently.

I so need to get on with this myself.