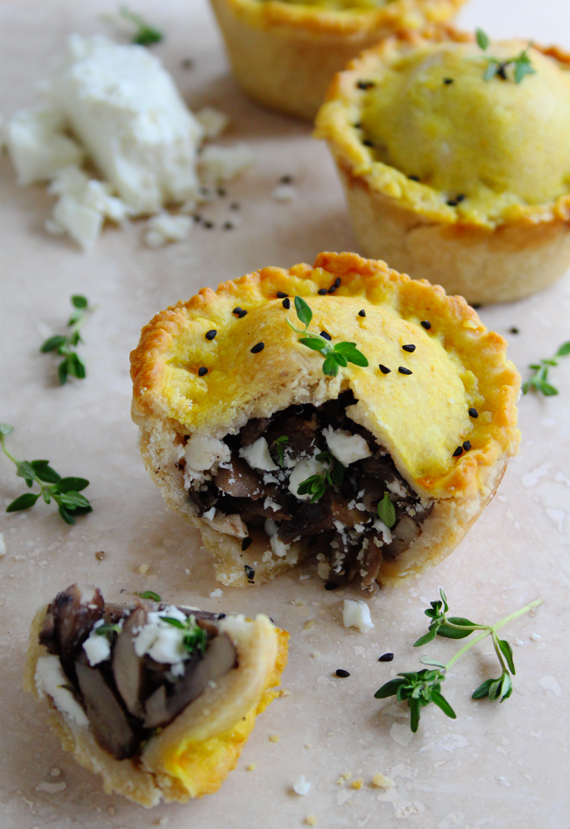 It’s safe to say that when it comes to pastry-making, I’m no professional. However, when I was challenged via Facebook, to come up with a hearty lunch idea, I was determined to deliver something good. And we all know pies are good.

These mini pies (made in a muffin tin because as I’ve discovered, I’m rather ill-equipped) are stuffed with a mixture of sautéed Portobello and chestnut mushrooms, sharp feta cheese, kalonji seeds and lemon thyme. They’re perfectly portable so you won’t have any trouble taking a couple to work, and even though they’re small, they’ll fill your belly no matter what.

Hot water crust pastry is usually made with lard because butter is seen to have too much of a rich flavour for the traditional pork pies it’s used to make. Obviously there’s no lard lurking in my fridge, but there is plenty of butter. I think the butter in my pastry can stand up to the vegetarian filling because of the robust mushrooms and sharp feta having enough flavour to balance it out. However, you can use vegetable shortening if you prefer.

So, how do you get that golden yellow colour on your pie? I’ve been trying to work out an alternative to egg yolks for ages. Usually, recipes say to use milk as an alternative to egg wash, but I always find the pie top looks really anaemic when it comes out of the oven. Then I realised the answer had been staring me in the face the whole time – I warmed my milk and whisked in ½ teaspoon of turmeric before brushing onto the pastry lids. It wasn’t sticky and once baked, did a great job in colouring the pie tops, just like egg yolk would do.

I’ve used kalonji seeds and thyme to flavour the pie filling because they’re gentle and aromatic enough to compliment the mushrooms and cheese – which, by the way, don’t need much help becoming delicious at all. 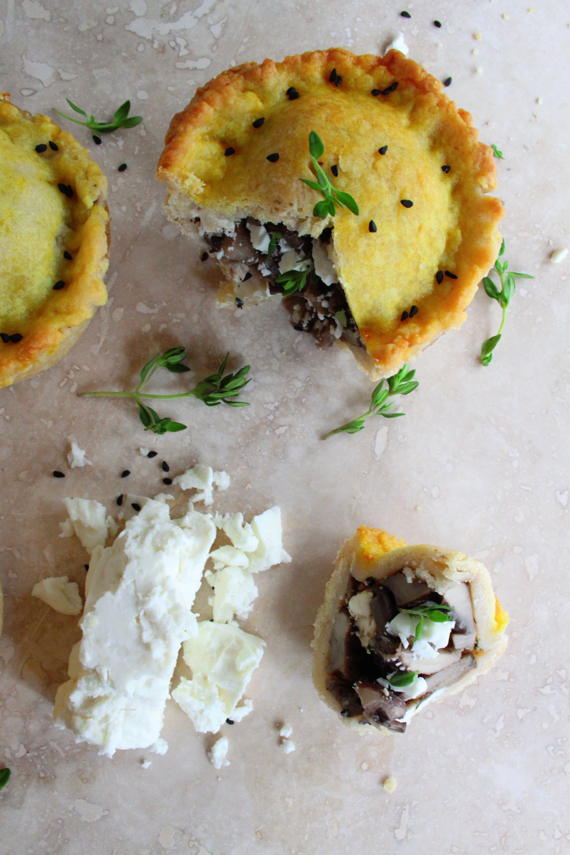 Milk and turmeric to brush the pastry lids

1. First, make the filling. Heat the butter in a large pan and add the kalonji seeds and garlic. Throw in all the mushrooms and combine. Leave on a low heat for five minutes, then once some moisture is released from the mushrooms, turn up the heat. Cook for a couple of minutes, then add the thyme and black pepper. Remove from the heat, place in a colander and allow to cool.

2. Once the filling is completely cooled, squeeze as much moisture as you can out of the mushrooms. Make sure you squeeze hard, otherwise your pastry will have a soggy bottom. Once you’ve done this, fold through the feta cheese and refrigerate.

4. To make the pastry, heat the water, milk and butter in a saucepan. Bring to the boil, then add in the flour. Stir with a spoon until it comes together, then turn out onto a floured surface and knead quickly until smooth and uniform.

5. Divide the dough into 6 even pieces, reserving 1/3 of each ball for the pie lid. Roll the first piece into a ball and use a rolling pin to make a circle, about 1/2cm thick to fit inside the hole of a muffin tin. Place inside the hole of the muffin tin and press to like the base, leaving a little overhang. Do this for the remaining 5 pieces of dough.

6. Fill each pastry case with mushrooms mixture, pressing down gently to make sure you get enough in.

7. Next, roll out the lids using the smaller dough balls, so they’re large enough to cover the pies and also allow you to crimp the edges to the little overhang you left on the bases. Make sure there are no gaps between the bases and lids.

8. Heat a little bit of milk in a bowl and add enough turmeric to get an egg yellow colour. Brush the tops of the pies.

9. Poke a small hole in the tops of each pie to allow steam to escape.

10. Bake in the preheated oven for 40 minutes or until golden.

hi this recipe looking delicious.....i have 1 question actully m allergic of mushroom can you give any idea what can i use instead of mushroom?

I love making pastry ... there is something therapeutic about it. I really like the rustic earthy flavors you have used in this. Looks lovely!

Sorry its not the question mark its full stop, its typo..