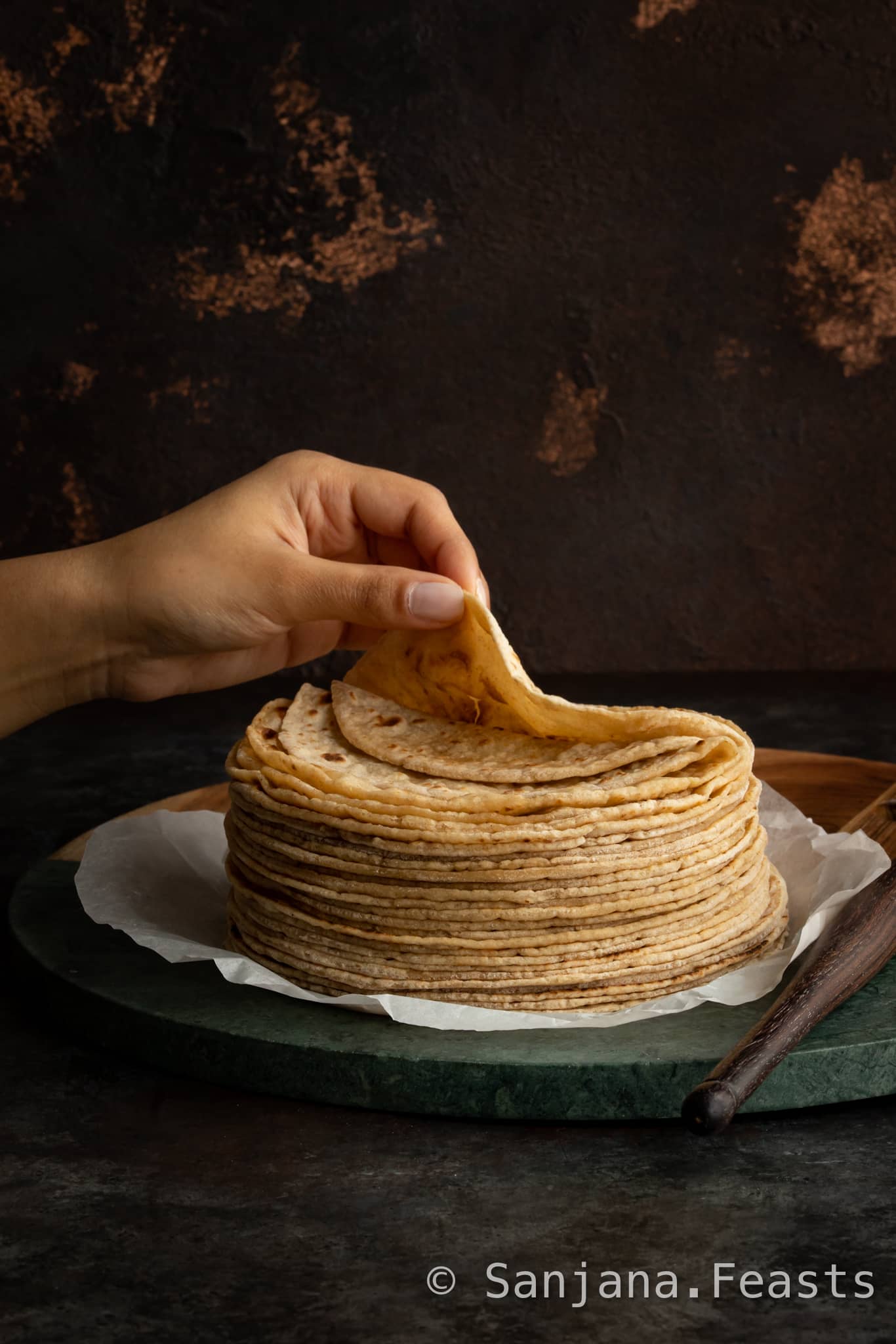 My best Roti Recipe – Softest Ever Chapati (Rotli). The smell that floods a home when the first roti goes on our battered old steel tawa surrounds me with a comfort and joy I cannot even explain.

It’s my most favourite smell in the whole world because it represents my childhood, my family and every moment (both happy and sad) in our home.

As far as day-to-day cooking goes, chapati (also called roti or rotli) are the glue that sticks everything on the Indian dinner table together. It scoops up curry and daal, pickle and everything in between.

Chapatis are everyday staple and without them, a weeknight meal would be incomplete. I’ve known Gujarati folks who won’t touch their dinner unless there are hot, freshly-made rotli on the table.

What are the different types of Roti?

In Indian cuisine, Chapati come in many different forms. Each region will have a take on it and that take will differ from village to village and home to home. There are no right or wrong answers when it comes to making chapati – it’s all down to personal choice.

Naming also varies depending on local language and dialect. You can find rotis from South Asia to Malaysia and Africa to the Caribbean.

… and so many more

Typically, Phulka (soft, thin, risen chapati) are most common in Gujarati homes. This is the style I grew up eating. We call them Rotli at home.

Softer and smaller than your average North Indian-style (tandoor cooked) roti (the kind you get in most Anglo-Indian restaurants), these Phulka have oil in the dough and are cooked on a super-hot steel pan (called a tawa or lodhi). So delicious and toasty!

I don’t often cook my rotli over an open flame because they’re so soft, they’d just break. They still puff up like hot air balloons as they cook on the lodhi.

Memories of my mother’s Roti Recipe – Softest Ever Chapati (Rotli)

They are something I was utterly fascinated by as a child. The first thing I ever ‘cooked’ were raggedy, uneven rotlis using my mini rotli-making set my aunty bought me when I was five.

From flatbreads to footballs

I’d peer over our cooker wide-eyed at the hot air balloon show my mum told me was happening. The suspense that built up as they rose from flatbreads to footballs was inexplicably exciting for a little girl obsessed with cooking.

I would roll out the same piece of dough over and over again and by the end of it, my poor dad would have to eat the splat-shaped biscuit thing. It would be presented it to him with such pride. Of course, he’d tell me it was delicious that and I was mastering it. I wasn’t.

How I make Roti Recipe – Softest Ever Chapati (Rotli) at home

There’s a certain routine to making rotli you wouldn’t dare mess with. Ask any Indian cook; once their routine is set in its ways, you’d be a fool to question it.

Everything from the patlo (board), to the velan (thin Indian rolling pin) and the tavitho (steel utensil used to flip the rotli), to the number of times the rotli is actually flipped, a cook’s rotli routine is sacred.

Making rotli at someone else’s house is literally the worst. “They never rise, the thickness of the velan is all wrong and the lodhi never gets hot enough”, etc, etc, etc. Of course, when it’s you having to explain your flat-as-a-pancake rotlis, all these excuses are valid.

Can Roti be frozen?

I recommend freezing roti after you have rolled them. Place between sheets of parchment paper or food-grade acetate to prevent sticking. Stack the roti one on top of the other and ensure you place a new sheet between each one.

Wrap tightly in foil and freeze. Cook from frozen, do not defrost.

Should I add butter or ghee to my chapati?

Everyone has their preferences on whether or not they add butter. I do because life is better with butter.

One of my favourite ways of eating rotli is straight off the lodhi, slathered with garlic butter and rolled into a cigar. This is what my Nanabapu (grandad) would do for my mum when she was little and something she then did for our my brother and I too.

How to roll round Roti

How to roll soft and round roti. Indian chapati or roti recipe with step-by-step photos. Amazing with curry and lighter than naan or paratha.

How to make soft and round roti. Indian chapati or roti recipe with step-by-step photos. Amazing with curry and lighter than naan or paratha.
Print Recipe Pin Recipe Rate Recipe

How to serve Roti

Serve hot with your favourite curry, daal, sambhar, chutney or pickle. I love them with this Melt-in-the-Mouth Burnt Aubergine and Spinach Curry.

It’s not imperative they rise – they will still taste great! Most importantly, keep practising. It’s so worth it.

If you like this Roti, you’ll love my recipe for Thepla 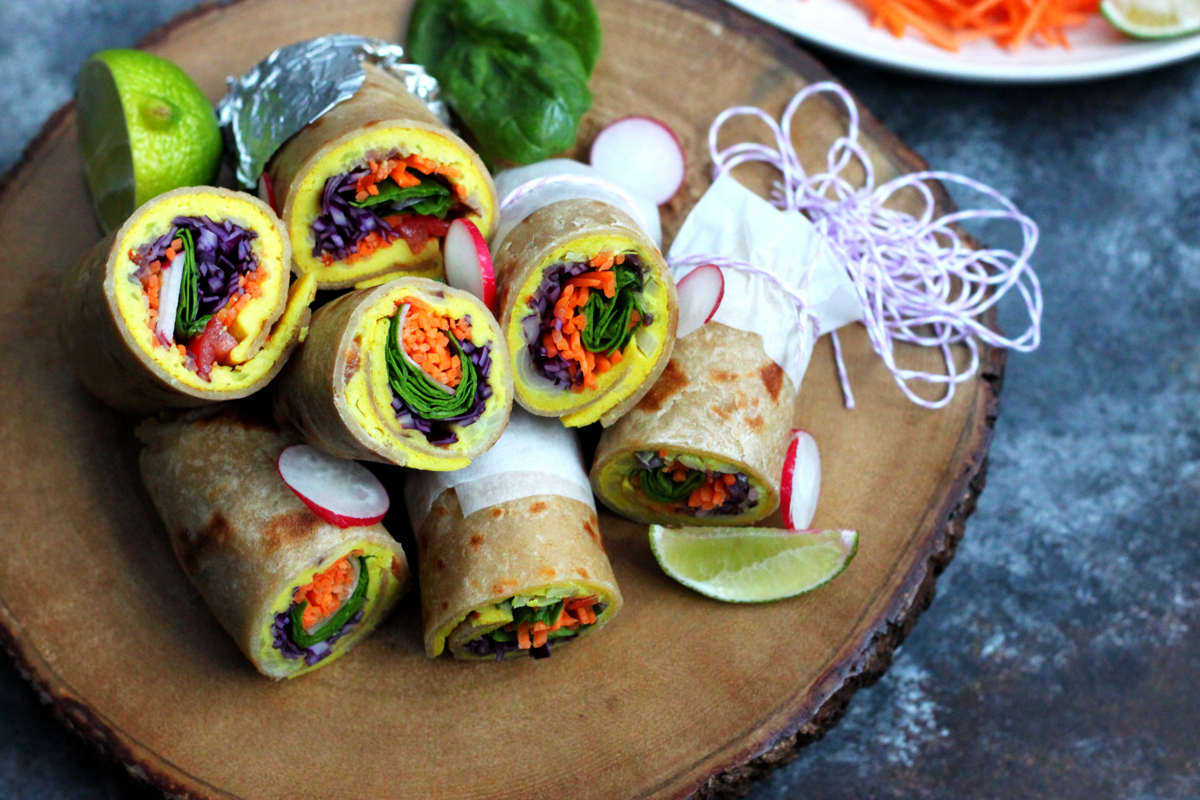 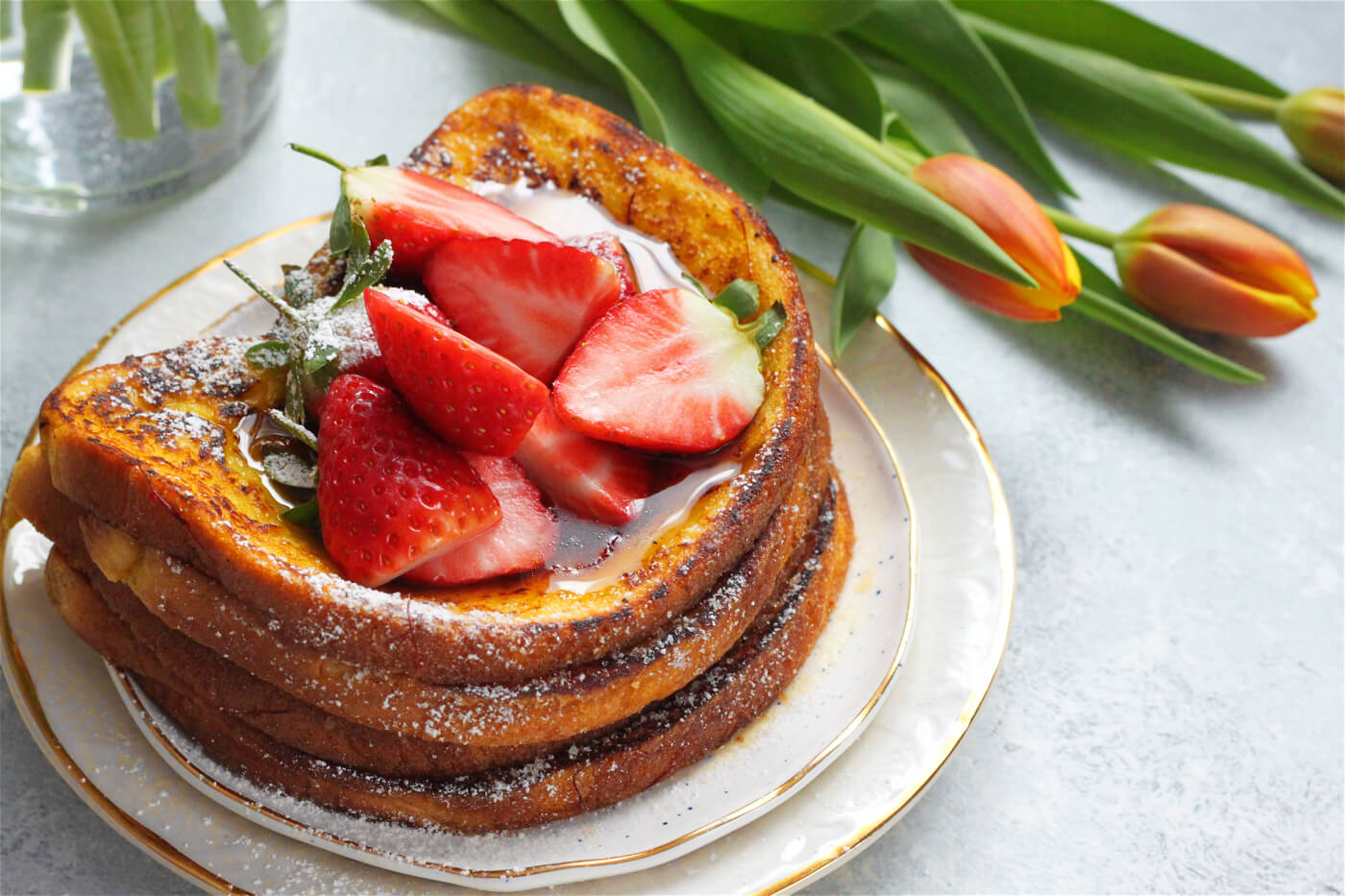 Can you post a video of your technique for rolling please?

Roughly how many does this recipe make please?

Don't we need to add salt ?

I never do since I use salted butter on top but the choice is yours.

[…] Roti are hearty and simple to prepare, although round rolling is a skill that takes practice. […]