Peshwari Naan is one of the most popular varieties of naan in British Indian restaurants.

What does Peshwari Naan have in it?

The combination of cream and golden syrup provides just the right texture for a spreadable stuffing that doesn’t crack the dough while rolling.

What if I can’t find golden syrup?

If you can’t find golden syrup, try using corn syrup, agave or brown rice syrup. Both honey and maple syrup have distinct tastes so these aren’t the best substitutes for golden syrup.

Where does Peshwari Naan come from?

Despite the popularity of Peshwari Naan in British Indian restaurants (BIR), this stuffed, leavened bread actually hails from Peshawar, modern-day Pakistan. The concept of a rich bread filled with a combination of nuts and spices is heavily influenced by the Indo-Persian cuisine of the Mughal Empire and its’ famously elaborate dishes.

Make Peshwari Naan in a dozen different ways. It can be thick or thin, spiced or not spiced, in a multitude of different shapes and colours. Other regional variations of Peshwari Naan include Kashmiri Naan and Kabuli Naan. Did you know that some British restaurants even serve up pink, red and orange versions?!

In South Asian cuisine, naan are typically flavoured with various ingredients like rosewater, vetiver, or with butter or ghee melted on them. Breads like Sheermal and Taftan are variations of naan, all originating in Iran. The word naan comes from the Persian word nān which simply means ‘bread’.

How to achieve a golden colour on Peshwari Naan

After cooking the naan, brush it all over with saffron milk. This will add a glorious sunset yellow colour, royal flavours and will keep the naan pillow soft. Follow up with a liberal smattering of ghee or butter to finish.

My recipe is not suitable for vegans, since it contains yoghurt, cream and milk. Feel free to switch in some dairy-free alternatives if you’d like to try your hand at a vegan version. I’d love to know how it goes for you!

How to make Peshwari Naan without yeast

This is a yeast-free Peshwari Naan recipe. The dough calls for leavening in the form of self-raising flour and additional baking powder.

What to eat with Peshwari Naan

Pair your Peshwari Naan with rich, banquet-style curries like Shahi Paneer, Malai Kofta or juicy kebabs such as Seekh Kebab.

3 other types of naan

Naan basket: A selection of favourites!

One thing I love about going to South Asian restaurants are the bread baskets. They contain a selection of the restaurant’s favourite breads like naan, paratha and roti.

If you are planning on feeding a crowd, you could mix up one batch of naan dough and customise it with different flavours and toppings.

Try a mixed bread basket of garlic and coriander naans, peshwari naans, keema naans and chilli-cheese naans on the table. Your friends and family will go wild for them.

How long does it take to cook Peshwari Naan?

This is a super speedy recipe. Each naan takes just 2-3 minutes to cook. I use the upside-down method for cooking the naans. Traditionally, they would be baked in a tandoor but at home, a steel, iron or aluminium frying pan (tawa) works a treat.

You can also use a regular non-stick pan or choose to grill the naans until they puff and blister.

The pan must be searing hot. Since tandoors can reach temperatures of up to 500°C, the hotter your cooking medium, the better! It is common for tandoor ovens to remain lit for long periods of time to maintain the high cooking temperature.

Walk through the entire process for making homemade Peshwari Naan with me. We’ll make the coconut filling, bind a soft but sturdy dough, and then roll them out so the stuffing doesn’t burst out of the sides. Finally, we’ll cook them upside down on the tawa until puffy and golden on the outside.

Combine the dry ingredients. Make a well in the centre and add the wet ingredients. Bind to create a soft and slightly sticky dough. Cover and rest the naan dough for at least 30 minutes at room temperature. The dough will become less sticky after resting, since this inactive time gives the flour time to hydrate.

If the dough is not adequately hydrated, it will not rise. It will also be quite hard and tough.

Combine the coconut milk powder, ground almonds, sultanas, cream, golden syrup and ground cardamom. Cream will add some moisture to the filling for a gorgeous Peshwari naan experience! Mash the mixture with the back of a spoon so it comes together easily. This will make stuffing the dough easier.

3. Stuff the dough and roll the naan

Be sure the dough covers the coconut filling completely. Any cracks will ooze the sweet filling during the cooking process. A little is fine but you don’t want it all to leak out. Watch my video to see a detailed version of the technique I use.

4. Cook the naan upside down!

Heat a tawa or large frying pan over a med-high heat (about 4-5 minutes). Do not use a non-stick pan for this cooking method. I use steel or aluminium.

Carefully turn the naan over and apply water on the back of the naan. Very carefully place the naan on the pre-heated tawa, water-side down. Cook for 40-50 seconds or until small bubbles appear on the surface of the naan.

Pick the pan up by the handle (use an oven glove if it’s very hot) and flip the pan upside down to cook the naan directly over the flame. The water will ensure the naan sticks to the pan. Cook until charred spots appear all over the surface of the naan.

I love using this upside down method for cooking naan. Most of us don’t have tandoors at home so it’s a great option to get that restaurant-style tandoori finish without a tandoor.

Smother the cooked Peshwari Naan with melted ghee or butter. You can also choose to sprinkle them with more nuts, sultanas, saffron strands or even dry, edible rose petals.

Can I make naan ahead of time?

You can make naan dough up to 24 hours in advance. After this, the leavening power of the self-raising flour and baking powder will wane. Wrap the dough tightly in cling film and keep in the fridge. Bring to room temperature before rolling.

You can make the Peshwari Naan filling up to 48 hours in advance. Store in an airtight container in the fridge. 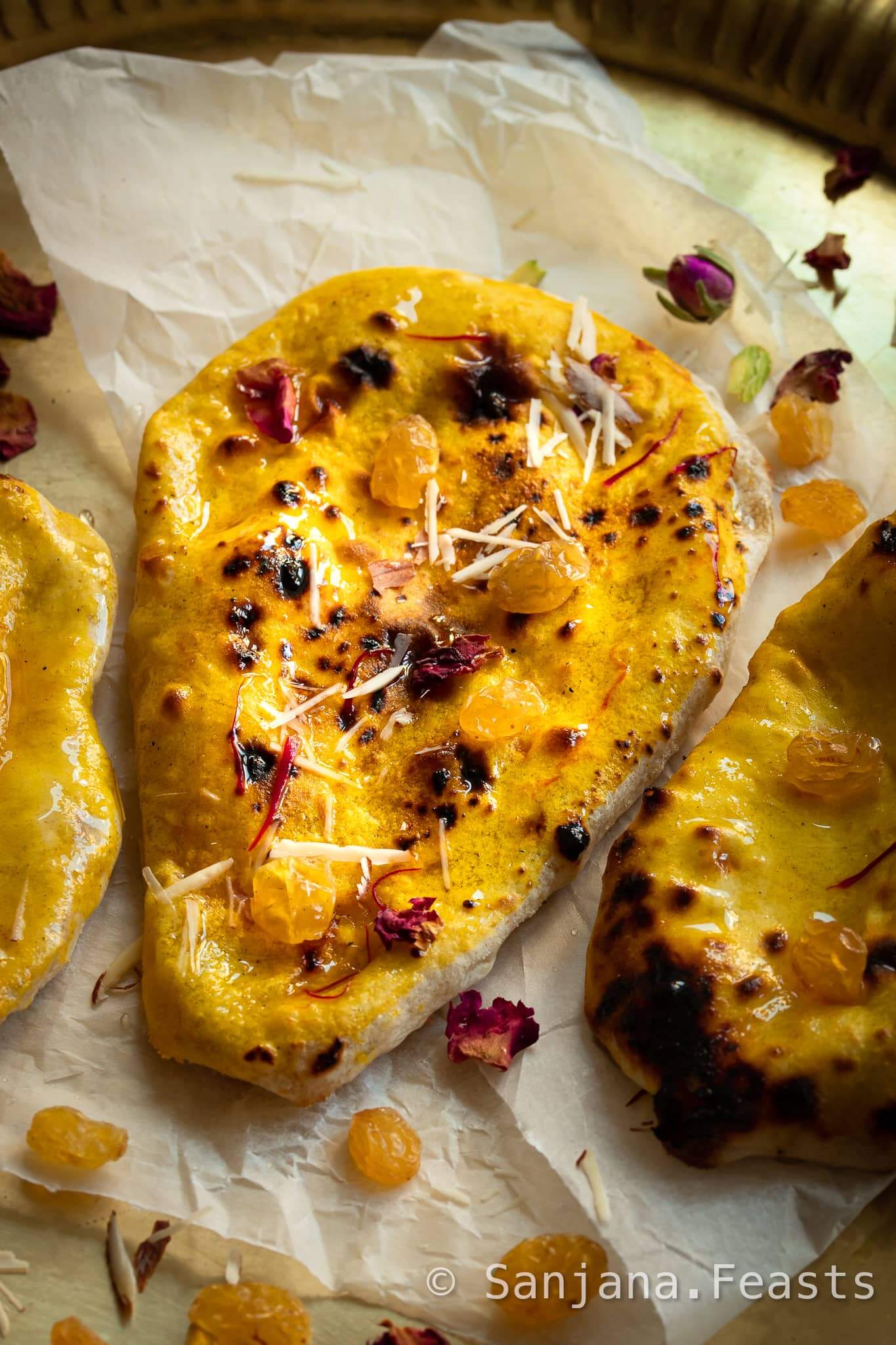 To make the dough:

To make the filling:

To form the Peshwari Naan (WATCH VIDEO FOR A VISUAL OF THE TECHNIQUE):

To cook the naan:

If you like this, you’ll love my recipe for Bullet Cheese Naan

Hi Sanjana,. Am writing to you from canada. My family lives in u.k. Every time I visited my sister who recently passed away,always took me for shish kebaab.Kashmiri naan and tea. Today, I came across your site and you brought back memories with your so delightful recipes. Sanjana you are a beautiful young lady with so much talent. I have tried your hondwo and was so good and healthy option. I will try your Kashmiri/Peshawar naan and will cherish my sister's memory. Thank you so much for your detailed recipe.

Made this last night. Best peshwari naan EVER. The flavours and textures are spot on. So proud of myself for doing it and I’m thankful for a foolproof recipe Sanjana. Thanks!