This puffy, blistered Bullet Cheese Naan has a chilli-cheese stuffing and is the softest, most delicious bread for mopping up curry, daal or even eating with your favourite tandoori dishes. This spicy take on cheesy garlic naan is a must for chilli lovers.

I call them Bullet Cheese Naan because they’re packed with flaming hot cheesiness. Each naan has a molten layer of chillies (both red and green) inside, as well as two types of cheese: Mozzarella and Cheddar. This combo equals amazing flavour and stretchy cheese pulls. It’s a yeast-free naan recipe which uses self-raising flour and additional baking powder for the softest cheese naan you will ever eat.

Both the cheese naan stuffing and naan dough are quick simple to prepare. To bring them together is super easy, too. The process is similar to making any Indian stuffed bread, such as Aloo Paratha, Paneer Kulcha or Aloo Thepla.

Naan is a leavened flatbread that’s traditionally baked in a tandoor (clay oven). It’s a popular style of bread in Western Asia, the Indian subcontinent parts of East Asia and the Caribbean. It’s a wheat flour preparation with leavening like baking powder or yeast. Other common ingredients in naan can include yoghurt and/or milk, water, sugar and salt.

Where does Naan come from?

An early version of leavened bread in India/Hindustan dates back to 1300 AD, after the Egyptians introduced yeast to the subcontinent.

It’s said the Naan we have now come to know through Indian cuisine was later influenced by Persia and the Mughal Empire (1526–1761). The word ‘Nan’ in Persian means bread. It was food for nobility, typically served with kebabs and other grilled meats, and mostly in the northern regions. The concept of tandoor (clay oven) cooking was also adopted. Over time, naan has been shaped into what we know it as today; A leavened flatbread that’s both soft and chewy.

The upside-down method for cooking naan

This recipe for Bullet Cheese Naan uses the upside down cooking method. It requires you to dampen the underside of the naan with water before placing it on a pre-heated tawa (flat iron, steel or aluminium pan used mostly for cooking Indian bread). You can also use a frying pan, but this method will not work on non-stick surfaces.

If you do not have a suitable pan, feel free to try one of these three alternative methods for cooking naan.

What to eat with naan

Naan is an incredibly versatile style of bread that pairs well with curry, daal, tandoori dishes and mixed grills. You can even use naan as a pizza base! It makes for a great wrap for kebabs and salads, or cut into bite-size pieces for dunking in your favourite dips. For me, naan completes North Indian meals beautifully.

Why is my naan not fluffy?

There are a number of possible reasons why your homemade naan isn’t fluffy or soft.

How do you make naan soft?

Which flour should I use for naan?

Flour with a fairly high gluten content is best, since we want the naan to have good rising structure and a slight chew. I use self-raising flour for its’ added leavening properties, but you can also use plain flour (maida). Simply add an additional 1 1/2 teaspoon of baking powder (2 1/2 tsp total for the recipe) and 1/2 tsp baking soda.

Can I use milk instead of yogurt for naan?

Yes. You can replace the yoghurt and water in this recipe for around 175ml warm milk. Add the milk gradually until you create a soft and slightly sticky dough. Be sure to knead it for at least 8 minutes. It should spring back very slowly if you press it with your finger. The dough for naan should never feel hard or dry.

Why do you add sugar to naan?

Not only does sugar improve the structure of the dough, it also helps give the naan a beautiful flavour and colour. I use icing sugar (powdered sugar) since it’s easier to incorporate into the dough. Granulated sugar and caster sugar are fine to use, however.

How long will naan dough keep?

This yeast-free naan dough will keep in the refrigerator for two days. Make sure you wrap the dough directly in cling film or place it in an airtight container. Since this recipe doesn’t use yeast, it’s best to use it within 48 hours since the baking powder will lose its’ leavening properties as time goes on. This will result in naan that’s less puffy.

Can I use this recipe to make plain butter naan?

Absolutely. Skip the stuffing in this recipe and cook the naan in the same way. Brush with your choice of butter and serve hot. Indeed, you may also just brush the finished naan with garlic butter for a delicious garlic naan recipe.

How to cook naan without a tandoor

Did you know there’s a quick and inexpensive way to give naans a beautifully-blistered surface without a tandoor.

Simply heat up a tawa until smoking hot, wet the surface of the naan with water and place it water-side down on the tawa. It will begin to puff slightly. After 20 seconds, grab the pan handle (wearing a heatproof glove if the pan doesn’t have a wooden handle) and flip it upside down to cook the surface directly over the open flame.

Walk through the entire process for making cheese naan with me. We’ll make the cheese filling, bind a soft but sturdy dough, and then roll them out so the filling doesn’t burst out of the sides. Finally, we’ll cook them upside down on the tawa until puffy and golden on the outside.

Combine the dry ingredients. Make a well in the centre and add the wet ingredients. Bind to create a soft and slightly sticky dough. Cover and rest the naan dough for at least 30 minutes at room temperature. The dough will become less sticky after resting, since this inactive time gives the flour time to hydrate.

If the dough is not adequately hydrated, it will not rise. It will also be quite hard and tough.

Combine the cheeses, chillies and cream. Cream will add some moisture to the filling for a gorgeously gooey cheese naan experience! Mash the mixture with the back of a spoon so it comes together easily. This will make stuffing the dough easier.

3. Stuff the dough and roll the naan

Be sure the dough covers the cheese filling completely. Any cracks will ooze cheese during the cooking process. A little oozing cheese is fine but you don’t want it all to leak out. Watch my video to see a detailed version of the technique I use.

4. Cook the naan upside down!

I love using this upside down method for cooking naan. Most of us don’t have tandoors at home so it’s a great option to get that restaurant-style tandoori finish without a tandoor. 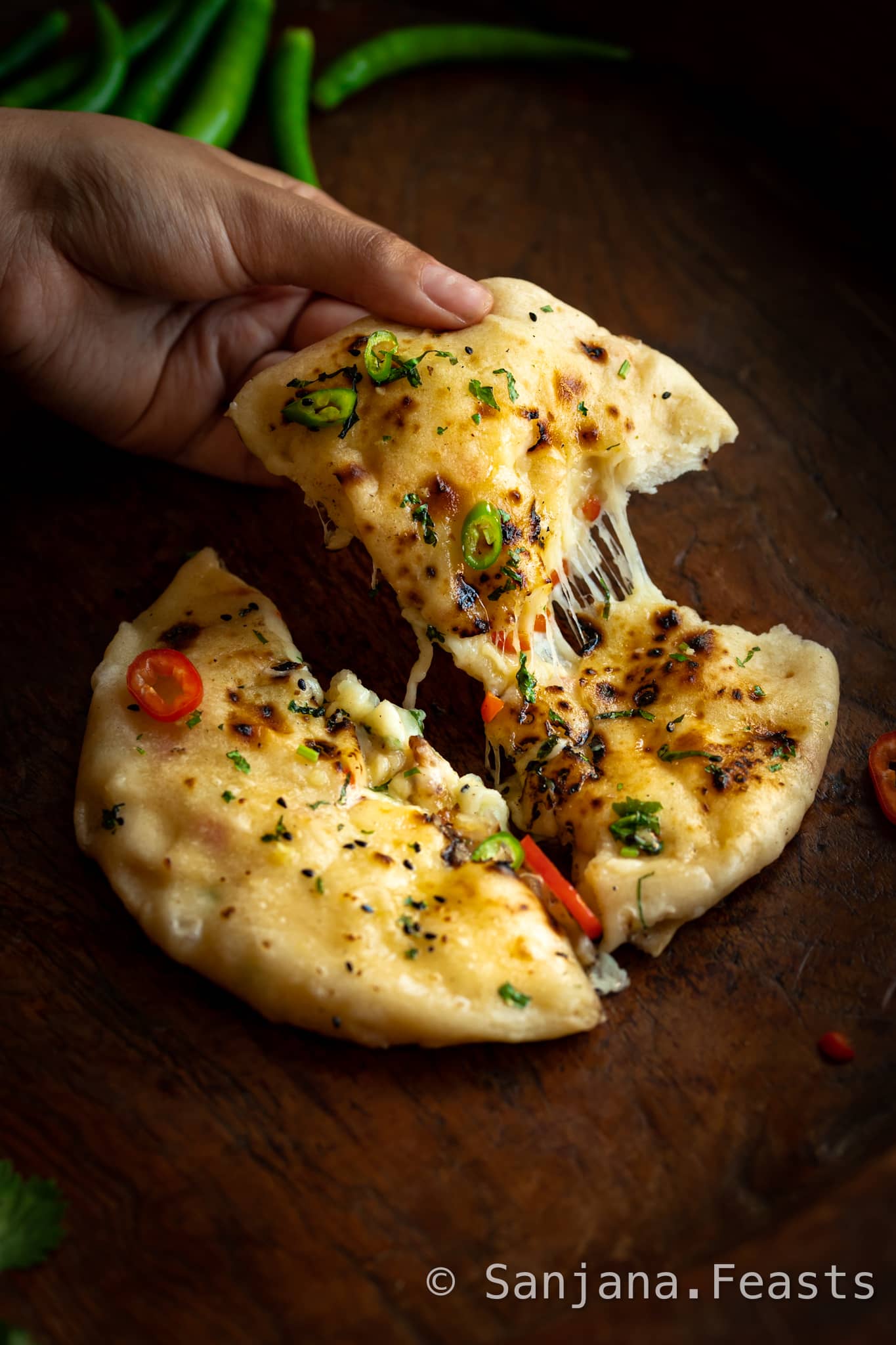 For the bullet naan dough:

You will also need:

To make the bullet naan dough:

To make the chilli-cheese stuffing:

To make the coriander-garlic butter:

To make the Bullet Cheese Naan (WATCH VIDEO FOR A VISUAL OF THE TECHNIQUE):

To cook the Bullet Cheese Naan:

Alternative cooking methods: Feel free to skip the coriander and garlic butter and brush with plain melted butter if desired.
Share your remakes with me!Follow me on Instagram @Sanjana.Feasts and tag #SanjanaFeasts for a chance to be featured!

Pin this recipe for later!

If you like this Bullet Cheese Naan, you’ll love my recipe for Paneer Kulcha

Aloo Paratha (Potato-Stuffed Flatbread)
Crispy, flaky Aloo Paratha are an emblem of soulful Indian home cooking. Of all the stuffed breads India is famous for, Aloo Paratha is the one loved in every family kitchen.
Check out this recipe

Soft Gujarati Thepla
Thepla are a staple any-time-of-the-day flatbread in Indian homes. Fresh fenugreek leaves give them their signature bitter caramel flavour.
Check out this recipe

Puffy Masala Poori
Learn how to make puffy, crispy Masala Poori at home. This easy recipe is foolproof. Just follow the step-by-step video and enjoy your fresh Indian Poori with any curry. I love mine with Gujarati-style Bateta nu Shaak.
Check out this recipe

Super Soft Roti Recipe
How to make soft and round roti. Indian chapati or roti recipe with step-by-step photos. Amazing with curry and lighter than naan or paratha.
Check out this recipe

Soft Spinach Roti
Can you believe the dough for these Soft Spinach Chapatis is enriched with a whole bag of spinach? Popeye would be proud! Pack a healthy portion of leafy greens into your meal with this easy recipe the whole family will love.
Check out this recipe

Quick Buttermilk Naan
Make lip-licking naans that are thin, tender and chewy, with perfectly-puffy blisters, just like in Indian restaurants. The flavour of these buttermilk naans is slightly tangy and so delicious with a slick of salty butter. Use them to scoop up your favourite curries, or dunk them in daal for a a comforting meal — you won’t believe they aren’t from a restaurant!
Check out this recipe

[…] alongside roti, naan or rice. I personally love this dish with a couple of flaky black pepper jalebi […]

Love this naan recipe, tried it with a peshawari filling and it was amazing!

My daughter made this. It was out of this world. No need for any accompaniments. It is just delicious and satisfying on it’s own.👌

Love everything you do. This is my favourite!! Thank you for sharing it!!