Vegan Raspberry Jam Doughnuts with Cardamom Sugar. Try saying that with a mouth full of doughnut! I have a soft spot for doughnuts. Doesn’t everyone? My allegiance lies with the pillowy, jam-filled variety with a light sugar coating. It has to be caster sugar as opposed to powdery icing sugar and the jam *must* be raspberry. It’s the law.

The smell of fresh doughnuts frying is like nothing else. If they bottled it, I’d wear it as perfume, leaving a faint whiff of “funfair” trailing behind me everywhere I’d go. You’d smell me coming a mile away and know I’d been around hours after I’d gone. From a purely practical point of view (and not at all a gluttonous one), this would also make me a very hard person to kidnap. I should probably stop watching so many Netflix true crime shows.

How to make Vegan Raspberry Jam Doughnuts with Cardamom Sugar

My vegan doughnut dough has a stretchy-smooth quality, as well as a slight sweetness which I find hopelessly irresistible once fried. Despite being made up of flour, sugar and oil, each pillowy puff is lighter than air.

A combination of almond milk, lemon, yeast and baking powder give them an ethereal weightlessness that you only get when you eat them hot, as soon as they’re made. I defy anyone to spot the lack of eggs and dairy in this recipe.

In my book, no variety of cakey baked doughnut comes close to the utterly fuzzy feeling you get from eating a yeasted, fried doughnut. It of course, involves hot oil and for you to set aside a bit of therapeutic baking time but there are moments you can break away to catch up on your favourite TV show, drink wine and/or have a power nap.

The results are special and not at all cake like. The dough needs to be left to rise and this is when the magic happens. Keep it in a warm place like an airing cupboard or even in the oven with just the light left on inside.

Swap almond milk for soy milk or oat milk if you want to make a nut-free version of these doughnuts — both work beautifully.

Over the years I’ve realised you can add most of the ingredients to the hot milk mixture with little to no compromise on results, which makes the dough-making process much easier. There’s no adding of butter in stages involved either. Reserve the salt and baking powder and add them to the flour mixture.

Once the warm-ish milk hits the flour, all of those lovely raising agents join forces to work their magic as the gluten in the flour develops through the kneading process. You can use your hands to knead the dough if you have arms of steel and the stamina to do it for 25 minutes or so. I do not have such superpowers and my stand mixer is my friend.

You can switch the cardamom sugar for cinnamon sugar and fill these with your favourite thick vegan custard instead of jam. Or better yet, fill them with both jam and custard. I’ve done this before and I don’t want to say everyone liked me more that week, but they definitely did.

Vegan lemon curd is also a noble choice of filling and it works particularly well with cardamom sugar.

I have also successfully steeped my warm milk with saffron strands for a saffron flavoured doughnut and it was dreamy, like the best marriage of Indian mithai and a classic funfair doughnut.

Be creative and report back with your results. I’d love to hear from you. 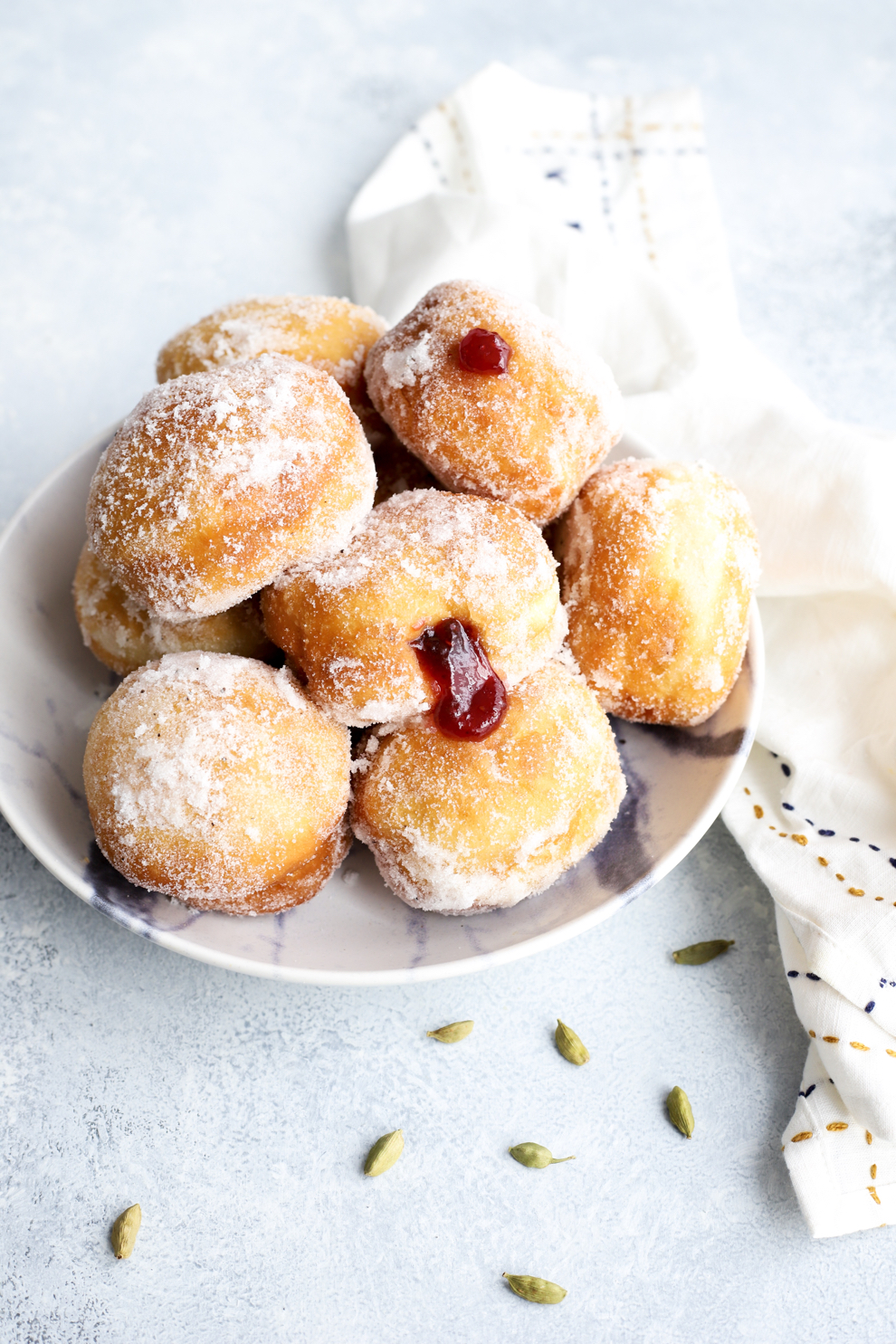 For the cardamom sugar:

Store the doughnuts covered and at room temperature. Best consumed within 24 hours. Will they all be eaten before then? Definitely.
Share your remakes with me!Follow me on Instagram @Sanjana.Feasts and tag #SanjanaFeasts for a chance to be featured!

Made these and they where amazing! I did your recipe for the first time. I’ve never made homemade doughnuts before so it took me most of the day but it was totally worth it! I altered the recipe just a smidge by using unsweetened creamy cashew milk instead of unsweetened almond milk and made blackberry jam with lemon zest to go inside them and I could not stop eating them! So delicious! Thank you for your recipe!!!!!

The donut dough did not rise at all making the donuts really hard and dense. I couldn’t work out what had gone wrong as I followed the recipe very carefully. After a bit of research, it turns out you should always wait to see if the yeast foams in the liquid mixture to make sure it has activated before adding it to the flour. Also, most recipes say to mix the dough for only around 5-7 mins, 15 mins seems absurdly too long compared to other recipes and I think resulted in a v. tough dough that didn't really rise despite me first doubling the time and then doing an overnight rise in the fridge... Really disappointed with this recipe.

Hi Rahel. It sounds like your yeast may have expired so the batch may be inactive. The mixing time for the recipe is accurate and follows the very reliable and widely-used windowpane method but due to your idle yeast, the dough will not have risen as it should. It would therefore have lacked tenderness. I'd recommend buying a fresh batch of yeast.

Heehee, made me chuckle! But law is strawberry! Strawberry, I tell ya!

Looking forward to these, do you think they would work in an air fryer? Thanks! El

Haha love strawberry too! I don't think they will work in the air fryer unfortunately.

You have some tasty recipes right up my alley. I'm South African and my veganism is yet to convince many meat lovers that that is a meatless substitute for any vegan dis. You're are amazing

These look fabulous, can't wait to make them. Do you think it would be possible to halve the recipe? I can't imagine they would freeze very well and we really couldn't (shouldn't) eat 12 in one go :)