When it comes to baking, the more lemon that’s involved, the better as far as I’m concerned. I’ve never met anyone who didn’t go weak at the knees for a slice of lemon drizzle cake or three. Have you?

Why is Lemon & Saffron such a great flavour combo?

One of my favourite flavour combinations has to be lemon and saffron. The humble, sharp lemon against the heady fragrance of saffron is such a winner. Whether you’re cooking something sweet or savoury, the two ingredients together are the perfect marriage of colour, taste and aroma.

Sweet is most certainly my preference because once baked, they mingle with the smell of toasty flour and fill the house with the most gorgeous baking scent. It’s pure and strong, unlike if you were making a savoury dish with 10 other spices.

In the past, I’ve successfully combined the two to make cheesecakes and seeroh (sweet semolina) which were both delicious. This time, I wanted to give a simple cupcake recipe a special makeover. They’re light, fluffy and so moreish.

How to make vegan lemon curd

Each fluffy sponge is filled with a golden-hued saffron lemon curd which I veganised with cornflour, coconut oil and coconut milk in place of eggs and butter. Use unrefined coconut oil to ensure the flavour of coconut doesn’t overpower the rest of the ingredients. It’s the saffron that gives it a pretty daffodil colour. If you have any leftover lemon curd, pop it in a jar and spread it on toast or scones for a special tea-time treat. It really is spectacular.

These Vegan Lemon Meringue Cupcakes are a little riff on the Vanilla Birthday Cupcakes I posted a while back. It’s a straightforward one using almond buttermilk to give the cupcakes lift. If you have any questions about the cupcake baking process, check here for lots of detail (can you tell I could talk about baking forever?).

The meringue might seem daunting at first. However, once you have all your ingredients laid out in front of you, it’s very simple. You’ll need a stand mixer with a whisk attachment or robust electric hand beaters to get that meringue whipped up perfectly. Reducing the aquafaba and adding agar-agar will give it more stability and the cream of tartar and sugar will help it whip into a sweet cloud of fluffiness. I used a kitchen blowtorch to toast the tops but if you don’t have one, you can pop them under the grill for a 15-20 seconds — just be sure to remove the cupcakes from their paper cases first!

These are perfect for parties, bake sales and for when you just want to eat a cupcake or three, alone, on your kitchen floor. 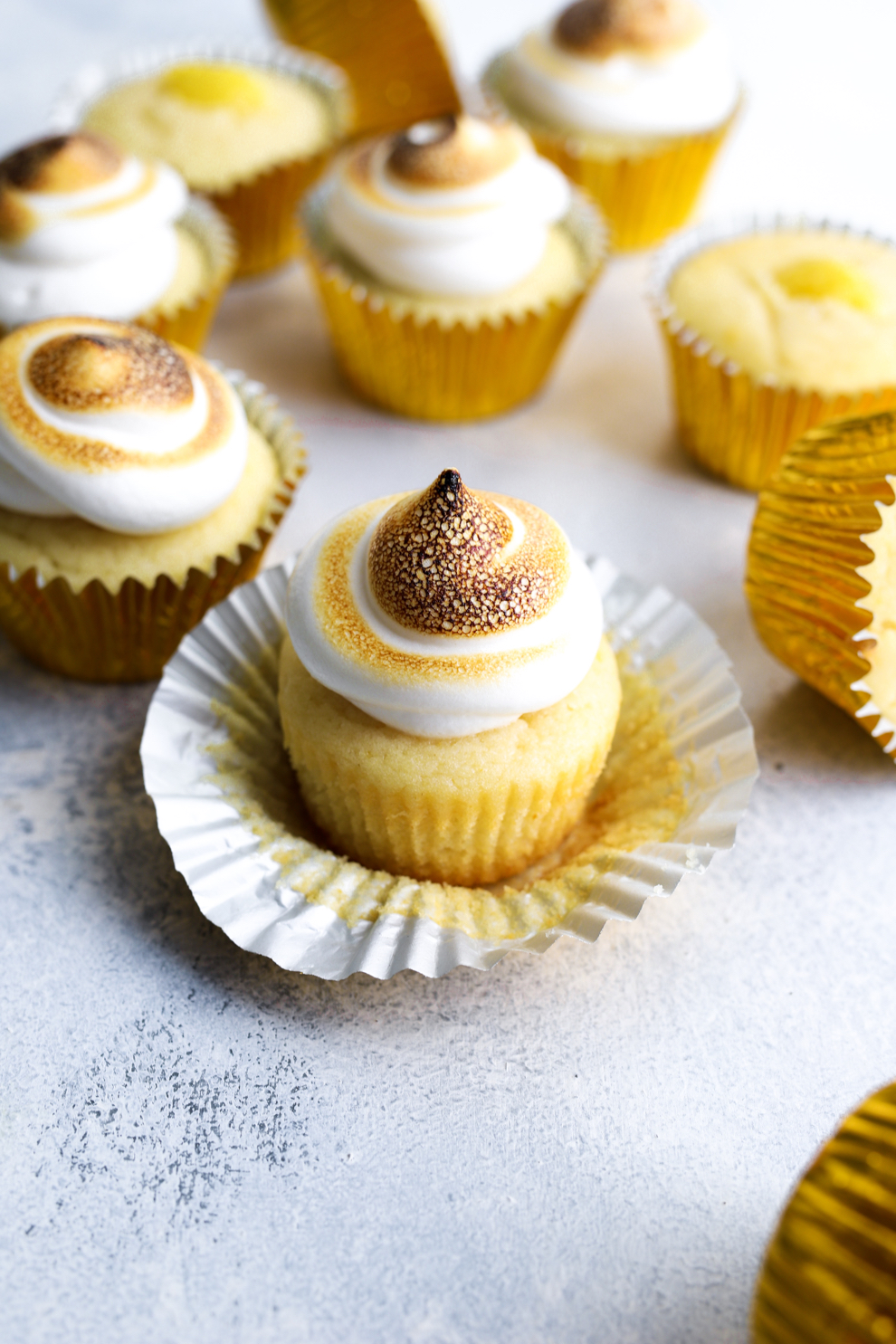 For the saffron lemon curd:

For the vegan saffron lemon curd:

For the vegan cupcakes:

For the vegan meringue:

Is there a single egg replacer that works for all vegan baking recipes?

There’s not a one-size-fits-all answer as the techniques and make-up of different bakes all require different approaches and ingredients. E.g. Mashed banana, flax eggs, chia eggs, psyllium husk and applesauce are fine for vegan bakes like banana cake, dense muffins and crumb cake but they don’t work so well in light vanilla cakes. The vegan cake would end up tasting of those ingredients rather than having the light, white, fluffy texture we all want in a good vanilla cake. I also tend to stay away from using these in vanilla cake baking because the results can be a bit too unpredictable.

No. Sugar helps proteins bind and form a good structure in cakes. In the absence of eggs, sugar plays a vital role in binding proteins, forming a good crumb and holding the cake together. Using liquid-based ingredients like honey will change the texture of final cake. Coconut sugar and sweetener have a different make-up to regular sugar too and swapping them in place of sugar will also change the final result of the vegan cake.

My eggless cake is tough. Where did I go wrong?

Overworked batter can produce a dense, tough cake. This is the case with all cakes, not just the vegan kind. If you overbeat cake batter, the in the flour gluten develops to unwanted levels and this will result in tough, stodgy vegan cakes.

Can I swap the white cake flour for wholemeal flour?

Technically yes, you could. Having said this, your vegan cake will be darker in colour and heavier than if you were to use a refined white flour. I’ve found that extra-fine self-raising sponge flour produces the best results by a country mile if you’re looking for a fluffy vegan cake.

My cakes are dry. Where did I go wrong?

They are overbaked. Ensure you’re baking it for the stated time at the correct temperature. Most domestic ovens tend to be a few degrees out but an internal oven thermometer can help ensure your oven is set at the right temperature. If you don’t have an internal oven thermometer you could also increase or reduce the cooking time depending on whether your cake is over baking or under baking

Will this recipe work with dairy milk and real butter for the buttercream?

Did you make this recipe?

Join my exclusive private Facebook group to get lots of recipe tips and to talk about all things Asian vegetarian food https://www.facebook.com/groups/2625129724379123/

The meringue turned out great!!!! Will be using this recipe again in the future