The code has been well and truly cracked. People all over the place are making gorgeous French macarons sans eggs and it’s downright remarkable.

It’ll come as no surprise that the secret ingredient in these eggless/vegan macarons is aquafaba – the vegan chickpea water that replaces egg whites in meringues, pavlovas and rich vegan chocolate mousse.

I’ve tried to nail the perfect eggless/vegan macaron for years and as soon as aquafaba came along, it was like all my baking prayers had been answered. It was the magic ingredient needed to form the basis of hundreds of recipes I’d always wanted to recreate without eggs. 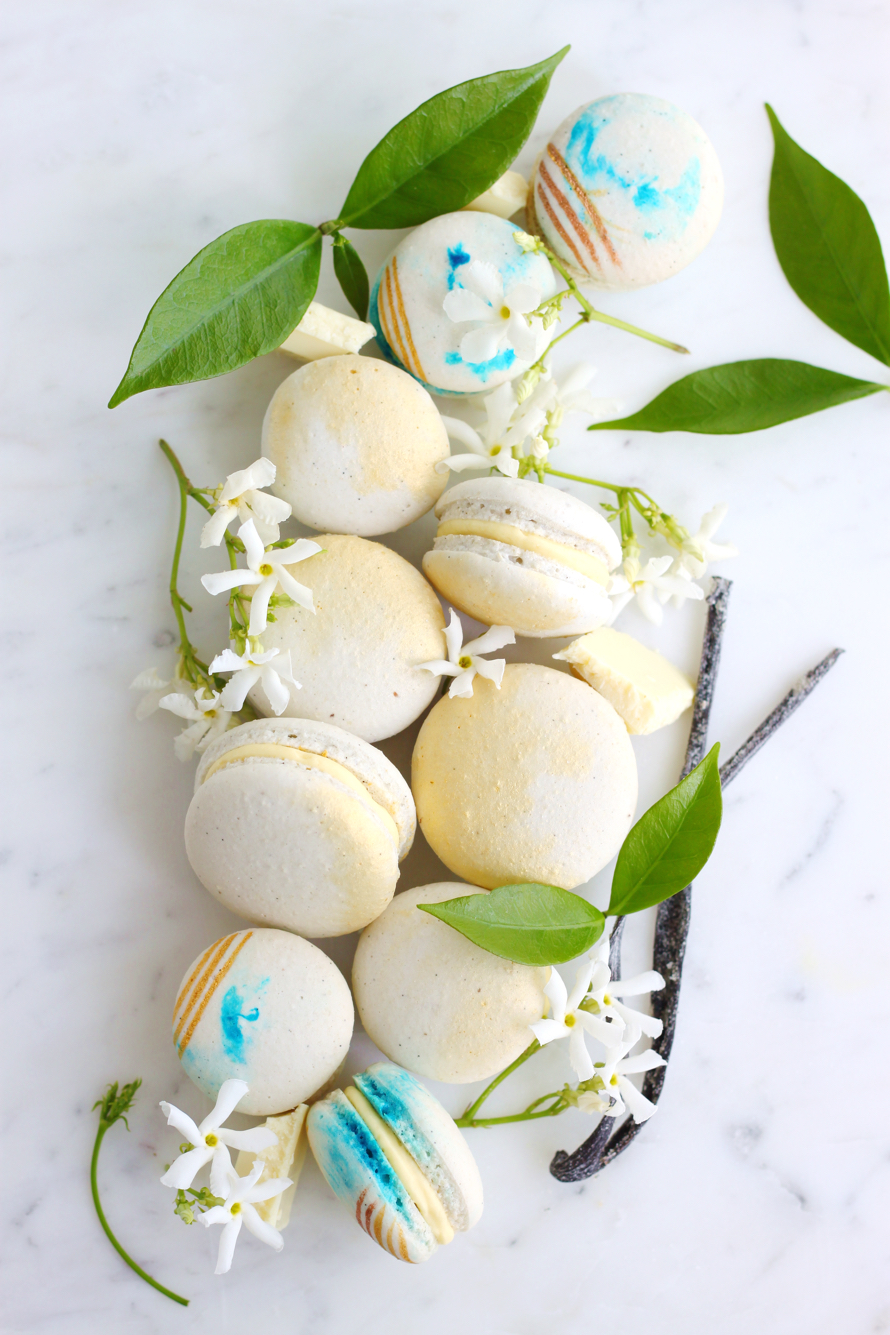 I’ve tried making macarons with both French meringue and Italian meringue and each time, the French meringue would look so promising and the end results were a total disaster – they’d puncture in the oven and ooze even though they had been rested for hours, were dry to the touch and baking at a low temperature.

It had to be a problem with the stability of the aquafaba French meringue. I read online that even with regular macarons, the eggs should be aged and that Italian meringue offers tonnes more stability due to the hot sugar syrup being boiled to 115C – past the soft ball stage and verging on the hard ball stage. This means the fluffy whites hold stiff peaks, whether you’re using eggs or aquafaba. All that beating in the stand mixer allows the proteins and acids in the whipped-up whites to bond with the sugar and create a stable network to trap in air for volume that wouldn’t look out of place in a L’Oréal advert. 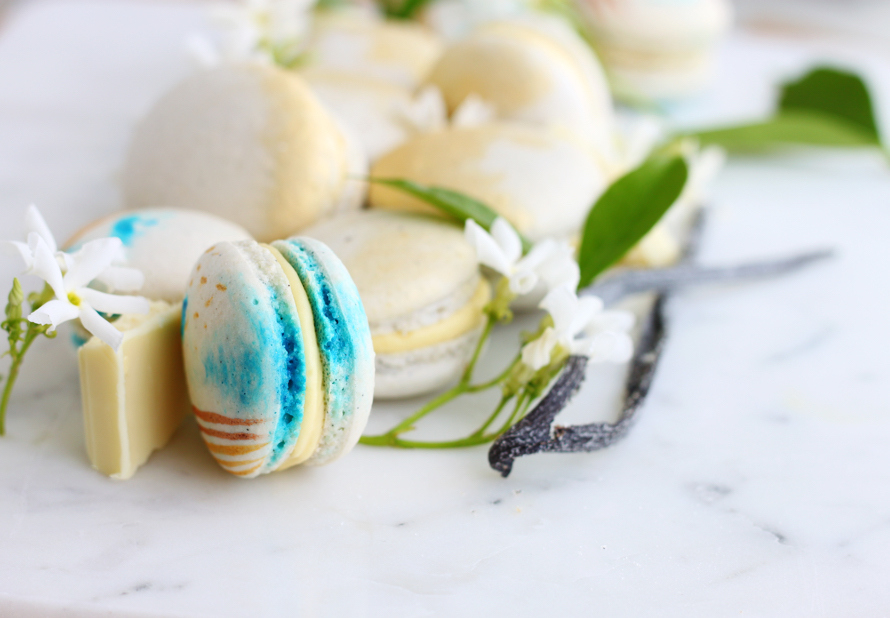 My recipe is based on a classic French macaron recipe in most ways – it contains equal measures of ground almonds, icing sugar and caster sugar. The changes I’ve made are that I used thick, reduced aquafaba in place of the eggs (which you absolutely cannot taste in the final product, I promise). I also made my sugar syrup for the Italian meringue with strong brewed jasmine tea for a gorgeous aroma and flavour. The rest of the changes come with baking the macarons.

I tested several batches of macarons, baking each sheet at different temperatures and found that the key to getting even ‘feet’ on every macaron depends on several things, baking temperature being an integral one. Here are some tips I learnt along the way.

How do I made vegan macarons?

I chose to fill my macarons with vegan white chocolate ganache – I love the feeling of chilled, set ganache against the chewy almond texture of the cookies. This is best achieved after filling the macarons, placing them in an airtight container and refrigerating overnight. 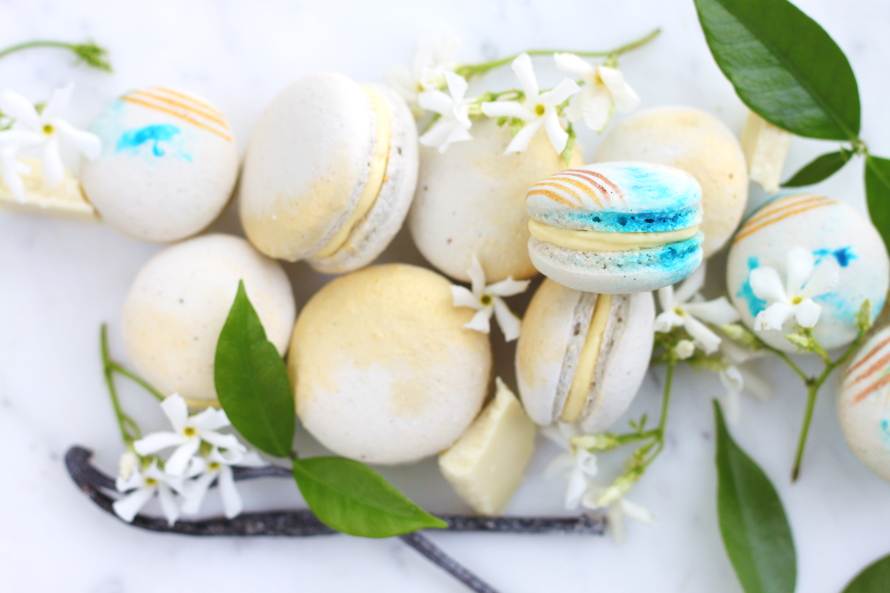 If you want to make dark chocolate macarons, replace the white chocolate ganache with your favourite darker variety.

How do I decorate my vegan macarons?

The shells are flavoured with jasmine tea and fresh vanilla. I added a little blue colouring to some of them for a pretty watercolour effect you don’t have to. The gold was edible gold dust painted on with a clean paintbrush. 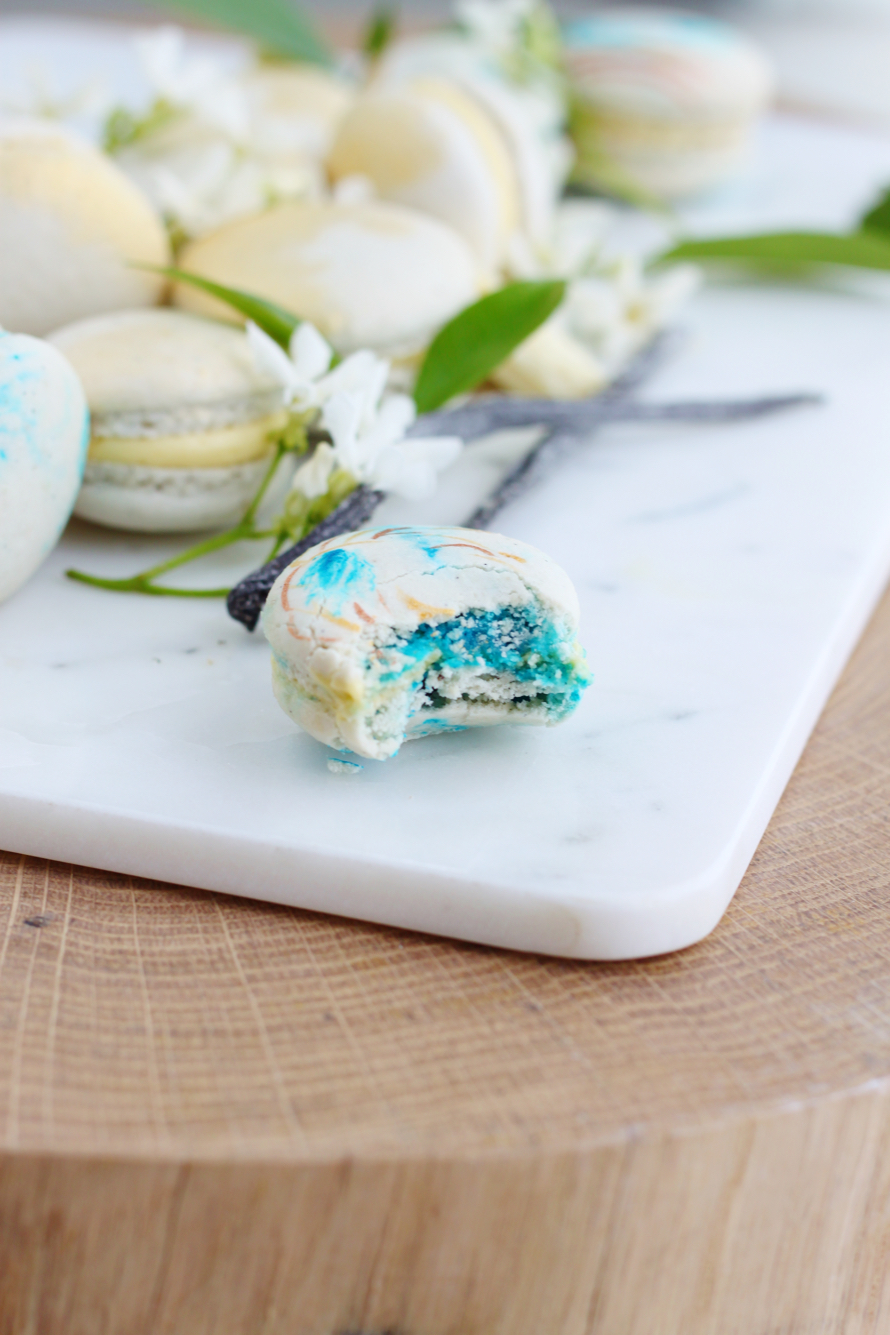 For The Macaron Shells:
350g aquafaba – from 2 x 400g tins of chickpeas in water (not salted water)

1. Take two 400g tins chickpeas and pour the liquids into a bowl on a weighing scale. Weigh out 350g.

2. Pour the mixture into a pan and simmer until the liquids have reduced to 150g. Pour into a bowl and cover with clingfilm. Allow to cool, and then place in the fridge overnight.

3. I like to line my trays well ahead as I draw a stencil (2cm rounds) on the reverse of the greaseproof paper so I can ensure the macarons are the right size and spaced far enough apart. For this recipe you’ll need 5 heavy bottomed trays lined with silicone greaseproof paper.

4. The next day, sift the ground almonds and icing sugar into a bowl. Add 60g of the chilled chickpea liquids and stir to combine.

5. Pour the rest of the chickpea liquids into a clean, grease-free stand mixer. Turn the mixer on to medium speed. It will start getting foamy.

6. Pour the jasmine tea into a pan and add the caster sugar. Boil until the mixture registers 115C on a sugar thermometer.

7. Turn the mixer on high speed and carefully but quickly pour the sugar syrup into the whipped aquafaba.

8. Add the vanilla and beat the mixture for 10 minutes. It won’t be massively voluminous but it’ll become thick, glossy and rather like marshmallow fluff. After 10 minutes, you should have a mixture that resembles a bird’s beak on the whisk when it’s pulled up.

9. Add the almond mixture to the meringue and use a spatula to incorporate fully. Use a spatula to make sure it’s well mixed, pressing it against the sides of the bowl and folding, 20 times or so. The batter should look like light and airy molten lava, dropping off the spatula and becoming one with the mixture within 10-15 seconds. Think magma oozing from a volcano.

10. Fill a piping bag fitted with a 1cm round tip with the macaron batter. Add any colours you might want to use.

11. Take your pre-lined trays and pipe the macarons from straight above, not on a slant. If your batter is the correct consistency, you’ll see it spread slightly and smooth out within 30 seconds or so for each round.

12. Once all your macarons are piped, give each tray a firm but steady bang on the countertop – I do it 5 times.

13. Allow the macarons to air-dry in a cool place for about 2 hours.

16. Once the tops of the macarons are touch-dry, bake the macarons, one tray at a time. Once the tray is in the oven (middle rack), turn the temperature right down to 115C. Set the oven timer to cook for 25 minutes. During the time they’re in the oven, pay to your oven’s hotspots and turning the tray if you need to (after the first five minutes if you do).

17. Remove the tray from the oven and allow to cool. Repeat the baking process for each tray.

18. While the last tray is in the oven, remove the ganache from the fridge and whip it until fluffy and light. Add vanilla if you like.

19. Once the macarons have cooled fully, gently peel them away from the greaseproof paper.

20. Match the macarons up by shell size. Pipe the ganache onto one half and gently press the two shells together for the perfect macaron sandwich. Decorate as you wish.

21. They taste WAY better the next day. Line an airtight container with kitchen paper and arrange the macarons in a single layer. Put the lid on and refrigerate overnight. 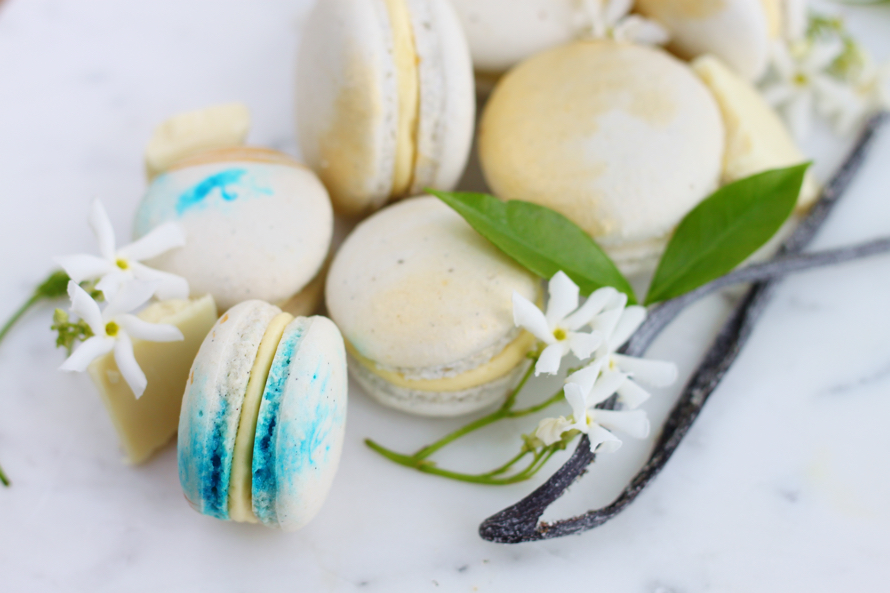 Try not to eat them all in one go. I struggled with that part.

Now go and make these and enjoy looking like a baking wizard in front of all your friends.

Click the image above to Pin it for later!

Hey Sanjana, just found this recipe of yours and wanted to know how long it lasts for in the fridge please? Thank you so much! Radhika x

For the ground almonds are we literally grinding almonds in the food processor or would almond flour work? I ground almonds today and I can't get it to a fine powder

Either will work! They need to be quite fine.

Thanks for sharing this recipe! My macarons seemed just perfect in the oven..but as i took them out of the oven they started to shrink..i was left with very thin macarons in the end! Pls pls advise :)

Hi there, thanks for your recipes... I followed the steps but the syrup when added to the Aquafaba turned liquid... It did not hold the peaks.... What could have happened.... I watched the thermometer it got up to 115°... any help?

Hi Natrisha. Aquafaba can be temperamental. It sounds like it could have been to do with the mixture not being stiff/whipped enough – if there is even a trace of oil, fat, or grease in the bowl or on the beater, it can prevent the aquafaba from whipping to stiff peaks. One trick to meringue success is to wipe the already-clean bowl and beater or whisk with a halved lemon: this eliminates any grease, and the acid helps the aquafaba turn into a meringue more readily. Good luck and I hope you have success soon x

[…] or chickpea brine is the magical egg white alternative rocking the vegan food world. From Vegan Macarons, to Pavlova, Meringue Nests, Meringue Kisses and even vegan cheese, the discovery of aquafaba by […]