The Ultimate Saag Paneer recipe is pure MAGIC! Soft paneer chunks in a creamy mustard greens & spinach curry. Every bite will melt in your mouth. Saag Paneer is the more character-laden cousin of Palak Paneer, made with mixed greens like mustard leaves (sarson) instead of spinach alone.

The velvety texture and subtle spicing of this recipe for Saag Paneer ensures the peppery mustard leaves and juicy paneer are the true stars of the show.

What’s the difference between Saag Paneer and Palak Paneer?

You may or may not know that Saag Paneer and Palak Paneer are two completely different dishes. The names are often used interchangeably which can be misleading.

Indian restaurants and big supermarkets are usually the worst offenders when it comes to making this mistake. Let me explain the difference here.

Saag is a dish is made from a combination of leafy greens. It usually includes mustard leaves but can also feature bathua (goosefoot), chaulai (amaranth), methi (fenugreek) and chane ka saag (chickpea leaves). Each one has a distinct flavour.

Ultimately, saag refers to a combination of mixed greens which can include, but are not always limited to spinach. The dish is made from only spinach leaves and paneer is called Palak Paneer.

Saag Paneer vs. Palak Paneer. Why does it matter?

You know how people always confuse Shepherd’s Pie and Cottage Pie? Well, many mix up Saag Paneer and Palak Paneer in the same way. Each is made using different ingredients which means they have very unique flavours.

Not all greens taste the same so the combination of leaves used can make a HUGE difference in the finished dish. I’m always disappointed when I order Saag Paneer and get bowl of Palak Paneer.

What do mustard leaves (sarson ka saag) look like?

Palak Paneer definitely doesn’t have the same peppery kick from the mustard greens as Saag Paneer does.

Where to buy mustard leaves (saag)

Saag is sold in bunches, similar to mature spinach in South Asian grocers. Try looking near the spinach, fenugreek and coriander. If you’re unsure of what you’re looking for, you can always ask the shopkeeper.

In terms of appearance, mustard greens have large, robust leaves with serrated-looking edges. The colour of the leaves is a deep green/blue. You can eat both the leaves and stalks.

Saag Paneer is traditionally quite a simple North Indian preparation of mixed greens and cottage cheese (paneer). The spices are quite minimal in comparison to a lot of Indian curries. However, it is often rich in either ghee or butter, as well as onions, garlic, ginger and garam masala. Green chillies add ample heat, too.

Can I use shop-bought paneer?

The short answer is yes. In fact, I encourage it. You don’t have to make your own paneer for this recipe unless you really want to.

If you do want to make your own paneer, head on over to my Homemade Paneer video for an easy step-by-step tutorial.

Can I eat paneer raw?

Yes! While it’s a good idea to heat paneer through before you eat it, there is absolutely no requirement to pre-cook paneer prior to adding it to a curry. Some people choose to shallow fry or deep fry paneer to give it some colour and texture. This will also help very soft paneer retain its’ shape in a liquid gravy.

You can also choose to soak paneer in hot water if you like it soft and milky. I often like to do a reverse soak method. I’ll describe the process below.

How to make paneer soft: The reverse soak method

Many curry recipes will call for paneer to either be fried or soaked prior to adding it to the gravy. While neither of these steps are necessary, they can improve the overall texture of the paneer for a more enjoyable eating experience.

The reverse soak method is something I’ve done for years and it produces amazingly soft paneer, with an appetising golden colour on the outside.

First, pan-fry the paneer in oil until golden on all sides. This will give the paneer a lovely seared colour on the outside, as well as help it hold its’ shape.

Place the fried paneer in a bowl and pour boiling hot water on top, until all the cheese is submerged. This second step will not only make the paneer beautifully soft on the inside, but it will also remove any excess fat from frying.

This is a technique I swear by and you can use it for other paneer-based Indian curry recipes like Paneer Makhani, Matar Paneer, Shahi Paneer and Paneer Butter Masala.

Since paneer does not stay crispy in a curry/gravy, there’s no need to worry about it softening on the outside.

A bit about pressure cookers

I adore my pressure cooker. I’ve had one since I can remember because it’s so handy for making everyday Indian food. I use my pressure cooker for daal, curry, khichdi and more. It’s definitely one of my most prized possessions in the kitchen!

How to cook saag in a pressure cooker

In this recipe, the pressure cooker breaks down the saag and aromatics in just 10 minutes.

How to cook saag in an Instant Pot

If you have an Instant Pot (or equivalent pressure pot), the saag takes around 5 minutes to cook on high power.

If you don’t have either, bring everything to the boil in a large stock pot and cover with a lid. Cook for 30 minutes until everything is tender. A small pinch of baking soda really helps break the leaves down quickly and evenly.

How to make vegan Saag Paneer

Simple! To make vegan Saag Paneer, switch the paneer for fried firm tofu cubes. Replace the ghee in the recipe with your favourite plant-based spread or vegan block.

Do I need a blender to make Saag Paneer?

My recipe calls for a blender because it makes quick work of creating a smooth sauce. For that reason, I use a high-powered blender like a Vitamix. However, you can use any blender you have, including a stick blender.

It’s also fine to serve the Saag Paneer chunky if that’s what you like. In Northern India (where Saag Paneer comes from), people chop all the greens and aromatics finely before cooking the saag low and slow.

The pot of saag is constantly beaten with a long spurtle (basically a wooden stick) to break everything down. You need serious arm power to make Saag the traditional way, under the Indian sun.

The finished dish is hearty and dark green, with a chunkier texture than that of my recipe below.

Treat mustard leaves as you would treat any leafy greens like spinach or kale. Wash it 2-3 times in plenty of fresh water to remove any dirt and grit. Trim any muddy roots of the saag off. Finely chop the stalks for quick cooking, since they can be a little tough. Chop the leaves into 1cm shreds.

Can I make Saag without paneer?

Yes, I often enjoy making my version of saag which uses mustard greens and spinach without paneer. It’s a huge source of nutrients and tastes delicious as it is. I particularly enjoy Saag with Makki di Roti (cornmeal roti) or naan.

A small amount of fine cornmeal will thicken saag. This absorbs excess moisture from the leafy greens, as well as adds interesting texture to the curry. You can buy fine cornmeal in the majority of supermarkets with an Asian grocery section, or in specialist South Asian shops.

A bag of fine cornmeal will also make the perfect roti (makki ki roti) to enjoy alongside saag.

How to make Saag Paneer

Boil all the leafy greens and aromatics (ginger, garlic and onions) along with some water and baking soda in a pressure cooker until tender. A pinch of baking soda will help the greens cook quickly!

This should only take 10 minutes, or 4 whistles in the cooker. Let it cool slightly.

Transfer everything to a blender and add the cornmeal. The cornmeal thickens the saag up nicely. As a result, it has a nice, velvety texture. I like to add a knob of ghee or butter to the blender to help everything emulsify to a silky sauce.

Pan fry the paneer in until golden and then soak in hot water (I just use kettle water) for 5 minutes. After a soak, the paneer will be juicy and squidgy.

Give the inside of the pressure cooker a quick wipe. Heat butter in the pot and add the dried red chilli, black cardamom and onions. Soften for 20 minutes over a low heat until golden. Then add sliced garlic and chopped green chillies. Cook for a further few minutes over a med-low heat. The onions should be lightly golden, soft and sweet.

Add the saag mixture and stir. Cook for 5 minutes over a low heat, stirring all the time. Be careful as it will bubble and spit. Allow to thicken slightly. Stir in the salt and garam masala.

Step 6: Add the paneer to the saag

Add the drained paneer to the saag and stir well. Heat through and serve piping hot with your favourite roti, paratha or naan.

What to serve with Saag Paneer

Serve this Saag Paneer the traditional Punjabi way with Makki ki Roti (thick cornmeal rotis), butter or ghee, onions and chillies. It might be a little non-traditional but I love Saag Paneer with rice. 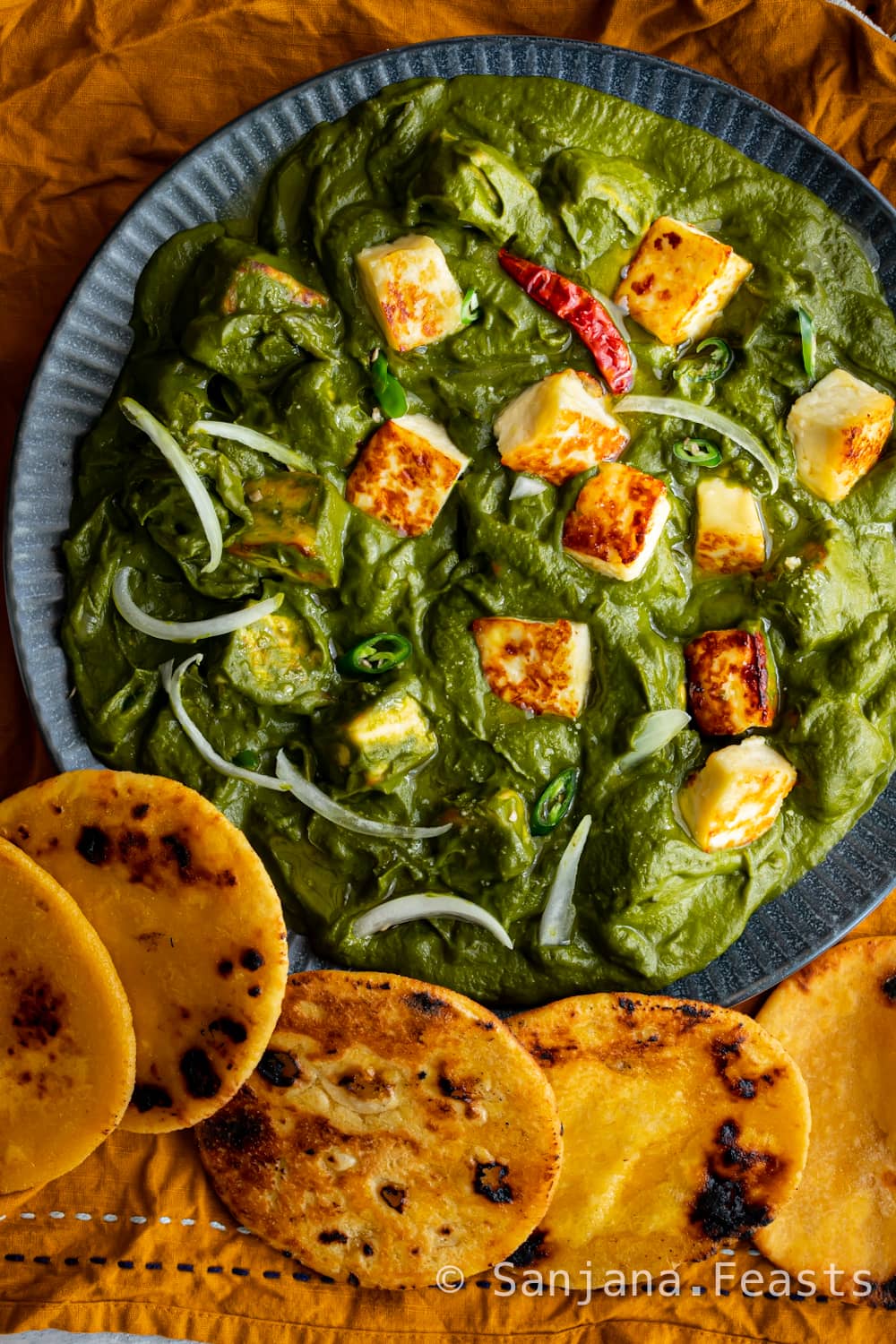 To prepare the mustard greens and spinach

For the tadka (tempering)

If you like this, you’ll love my recipe for Matar Paneer

The Best Homemade Paneer (Softest-Ever Cubes!)
Soft and squidgy homemade paneer for curries, paratha fillings, chilli paneer, samosas and more. This simple recipe includes tips for making fresh paneer that tastes like it just came from the dairywala.
Check out this recipe

Restaurant-Style Shahi Paneer
Delicious, rich & creamy Shahi Paneer is a vegetarian food hero in North Indian cuisine. Scoop this curry up with flaky parathas or serve with basmati rice.
Check out this recipe

My favourite go to recipe for Saag.

I made this using mostly Swiss chard from my garden. It was delicious!

Amazing!!!!!!!!!!!! I can’t tell you how many times I’ve ate saag paneer in my life... I wouldn’t want to know because even though it’s been hundreds, I’d be sad it hasn’t been more LOL! It’s literally one of my favorites.... This was absolutely delicious!!! Thank you so much for sharing this with us! You shared so much detail and your love for what you do reflected everywhere on this recipe. I look forward to trying your other recipes soon! Laura

I was hesitant to try this because I love the Saag paneer served up at the Indian restaurant near me. I never thought I could make something that tastes nearly as good. Well... I was wrong! This is the best saag paneer I have ever tasted in my life (I have had many!). It’s so flavoursome with a texture I can only describe as velvety. I’m bowled over. Printed and filed for forever use. Thank you v much!

A fantastic telling of the history of the dish. Thanks for keeping us all informed and for sharing recipes that work so well. I never do a curry night without one of your recipes. Have made this 4 times now and it’s always so tasty. I am going to try your burnt aubergine and spinach curry next.