Follow my video tutorial and make this easy Garlic Butter Khichu (Papdi no Lot) recipe. These steamed Indian rice dumplings are soft and chewy in texture. I dip them in the most delicious garlic butter to finish.

The combination of garlic butter and cumin against the blank canvas of the rice flour dumpling is so comforting and delicious.

What is Khichu (Papdi no Lot)?

Khichu is also known as Papdi no Lot, since it is the same dough (‘lot’) we use to make ‘papad’ or rice poppadoms. Instead of rolling, dehydrating in the sun and the frying to a crisp cracker, many people choose to steam the dough for a quick snack.

This dish has many names depending on where you’re from. Some of the most common include: Khichi, Papdi no Lot, Khichu and Khichiya Papdi Lot. The word Khichu is derived from the word ‘Khinch’, which means ‘to pull’ due to the soft and pliable nature of the rice flour dough.

While the concept of eating steamed dough might seem like a strange one for those not accustomed to it, you can liken the texture if Khichu to African Ugali or a savoury style of unstuffed Japanese Mochi.

With so much focus on Gujarati snacks like Dhokla, Muthiya, Handvo and Khandvi, it’s easy to forget the belly-warming pleasures of Khichu. This steamed snack has all the tasty qualities of the aforementioned tea-time snacks, with the added bonus of being relatively low in fat (depending on how much oil or butter you choose to add).

Khichu is traditionally eaten during the monsoon season.

Khichu with achar masala (pickle masala) and oil is a staple in most Gujarati homes and the most well-known way to serve the dish. My take pairs the flavours of garlic bread with the classic tea-time snack. Everything’s better with garlic butter!

There are as many ways to serve Khichu as there are different names for the dish. Some people like to shape the dough into small doughnut-like pieces before steaming, while others will simple cook the mass of dough in a steamer, microwave or lidded pan. My method choses the former option for even cooking and easy serving.

Rice flour is one of the most common flours for making Khichi (Rice Khichu) however, the dish is also delicious when we make it with mung bean (moong khichi) flour, millet flour (bajra khichi) and cornmeal (makai khichi). Each flour will require a slightly different proportion of water.

Ingredients you need to make Khichu

Kharo or papad khar refers to mixed carbonates of soda. It is the Indian name for alkaline salt or sodium benzoate. It is a key ingredient in dishes like Khichu and Rice Khichiya Papad (rice poppadoms). Use it in a similar way to baking soda (bicarbonate of soda).

How to make Gujarati Rice Khichu

Boil the spices and herbs in water

Cover the pan of boiling water with a lid

I often like to cover the pan with a lid during this process so the water doesn’t evaporate away, and therefore affect the consistency of the Khichu dough.

Add the rice flour to the water

Stir the rice flour in quickly and throughly. It will create a lumpy dough.

How to knead Khichu dough

There are a number of ways to knead the dough for Khichu. Firstly, it’s important to note that the dough will be very hot; too hot to touch for most people.

Begin by stirring with a wooden spoon or the handle of a rolling pin. This is the best way to incorporate the rice flour into the water.

Turn the khichu dough out

Secondly, once the dough cools, turn the dough out into a large platter or plate.

Use a steel bowl to knead the dough and remove lumps

Begin to knead the khichu dough using a small, flat-bottomed bowl. A steel bowl is ideal. You can also add a small amount of oil to make the dough smooth and supple.

Form the Khichu into doughnut-shaped pieces (optional but cute)

Wet your hands with water or oil. Portion the dough into golf-ball sized balls, flatten and poke a hole in the centre, similar to a doughnut. This promotes even cooking and is handy for serving.

Finally, once the dough is free from lumps, it’s ready to form and/or cook out by steaming, microwaving or pan cooking.

How to cook Rice Khichu

You can steam, microwave or pan-cook Khichu. Find my top three ways to cook

How to steam Rice Khichu

First decide whether you want to serve the khichu in pieces, or cook in one solid mass. I like to form mine into small doughnut shapes for even cooking. Set up your steamer, ensuring the water does not touch the khichu.

Place the khichu on a greased plate with holes in it and set it on top of the steaming rack. Cover with a tight-fitting lid and steam over a medium-high heat for 18-20 minutes.

Cover the khichu to stop it from drying out. It will take around 5-6 minutes on high power.

How to pan cook Khichu

If you’d like to pan-cook your khichu, it will need to be in a solid mass shape. Keep the papdi no lot mixture covered and over a low heat. Stir frequently to ensure it doesn’t burn.

How to cook khichu in an Instant Pot

It’s entirely possible to cook the khichu in an instant pot. Set the Instant Pot up for steaming with a steamer insert and fill with water. It’s important that the water does not touch the khichu. Place the khichu on a greased plate with holes in it and set it on top of the steaming rack. Cover with the lid and steam cook (without pressure) for 15 minutes.

How to make vegan Khichu

Khichi is inherently vegan and free from dairy. Simply switch the butter in this recipe for any oil or vegan spread of your choice.

Yes, this recipe uses rice flour and is therefore, free from wheat/gluten.

Equipment I use to make Garlic Butter Khichu 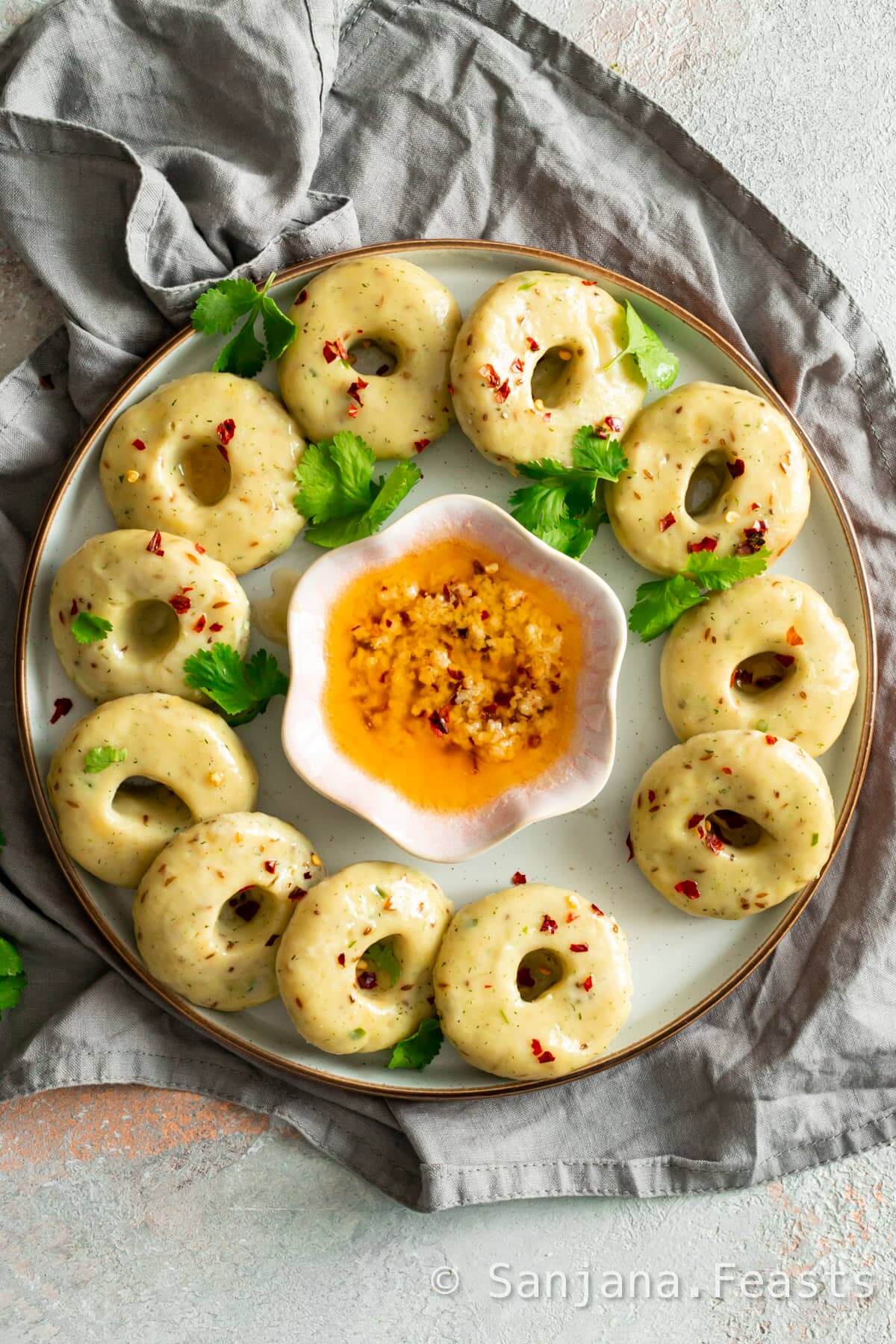 For the Garlic Butter

To make the Garlic Butter

If you like this, you’ll love my recipe for Sticky Chilli Khichi